What you need to know about hiring an interior designer for your salon project. 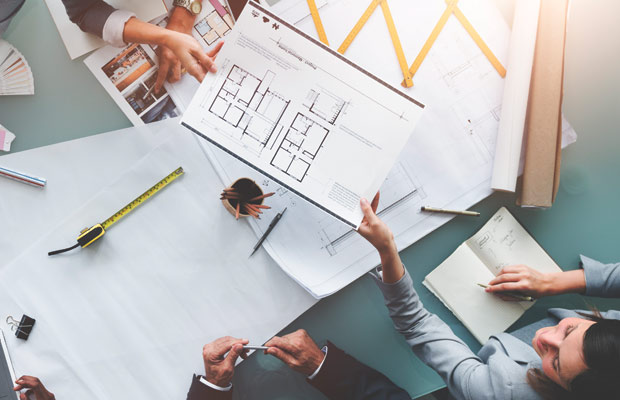 You may have your own ideas and inspiration for your ideal salon space, but having a professional interior designer pull it all together on paper is the first step in having it come to life. That said, not every interior designer has the experience of designing a salon, and there are certain qualifications that are a must. Here’s the rundown of seven secrets you can follow to ensure you’re hiring the best salon interior designer for your project according to experts who have decades of experience creating salon designs.

“Ask the designer about the projects they are working on,” suggests Gerry Grossi, general manager for Belvedere Canada. “Ask to see some of their projects. We often take clients to salons so that they can see what we have done.”

When it comes to salon design, knowledge is key. You’ll want to hire a design firm with a Building Code Identification Number—otherwise, you won’t be able to obtain permits from municipalities. In addition, having a lawyer review your lease before you sign is a good idea to ensure that you can, in fact, renovate the property.

Sandra Fiore, co-owner of Fiore + Greco Design Inc., a Toronto-based salon design firm, also recommends looking for experts in the field. “Designing a salon is very different from
a restaurant when it comes to just about everything, from the size of the chair to the placement of electrical outlets,” says Fiore, who adds that it’s important to have the right voltage, too.

“Designers are not project managers,” cautions Fiore. After years of watching interior designers play this part on reality-television design shows, Fiore says many salon owners have the expectation that their interior designer will take ownership of the project. “We have about four site visits to make sure that the design is correct, but we aren’t there to fight,” she says, adding that it’s important that both the designer and general contractor communicate with each other—otherwise, you won’t get the quality of work you expected and there won’t be a way to undo the work once it’s complete. For example, the designer needs to make sure that the placement of each station allows the stylist to walk around the chair, which means your last chair must be three feet from the wall.

Grossi says having a wish list from the salon owner goes a long way. “We can go through the woodwork, flooring, electrical and plumbing. And we need to make sure the furniture budget is clearlly outlined so that everyone understands where and how a client wants to spend it,” says Grossi.

“A designer must be able to translate what’s on paper into real life,” says Leonora Briones, a senior designer for Takara Belmonte in Mississauga, Ont. She adds that while this seems like an obvious skill, it’s not always an easy one to achieve. Briones says it’s important that salon owners have faith in a designer’s ability to bring their vision to life, and if you haven’t agreed to a design on paper, it will be very difficult to do so in reality.

Both Fiore and Briones encourage clients to bring in their ideas and concepts from magazines and Pinterest to give the designer a springboard for inspiration, which allows for a solid initial discussion about what is doable given the salon space and budget.

“You want to be able to take that idea your client has and really make it the best it can be,” says Fiore. “As a designer, having a good relationship will help you guide them in the right direction.” For example, a salon owner may have certain expectations about the layout of their salon, but through their expertise, a salon designer will be able to suggest configurations that allow for the best work flow because they have a knowledge of spacing that will prevent congestion in one area. Having an ongoing discussion throughout the design process helps manage everyone’s expectations and results in the best design possible.

For Grossi, supporting both the clients and working with the contractors is an important part of achieving an optimum end result. “You have to be able to be trusted and you are more than experienced for the project.”

For those who think they can design their own salons, you can, but it may cost more than you think. “Put your outlets in the wrong location and moving each will cost you about $1,000,” says Fiore, who adds that when you’re trying to open your business in three months, time is money. Briones echoes her sentiments. “You need to know the proper distances, from the washing station to the styling station, for plumbing and electrical and that’s something that an experienced salon designer will be able to calculate easily,” she says. In some cases, salon owners have overestimated their space and ordered too many chairs for their salons.

Along with using your inspiration, a salon interior designer with experience will be able to tell you the current trends and what you may want to consider incorporating into your salon. “Right now, we are including digital screens and signage behind the reception desk for branding and product sale,” says Fiore.

In addition, Fiore says the salon experience is shifting, with hairstylists and colourists coming to the client as opposed to clients moving from one area to another—a factor that may affect everything from the type of chairs you opt for to the placement of your styling stations.

When it comes to choosing finishes, Fiore always steers clear of adding green tones in a salon, which can affect the appearance of blondes. What colour palettes do work? “White and neutral hues, with a bold colour used as a naccent,”says Briones. She adds that design, for the most part, has shifted to more linear and minimalist styles, with many owners wanting to incorporate sustainability into their overall designs. Along with colour, lighting plays an integral role in a salon—one that is practical as opposed to adding ambience. It’s one more distinction that Fiore makes, adding that restaurant designers would have a completely different view of this element.