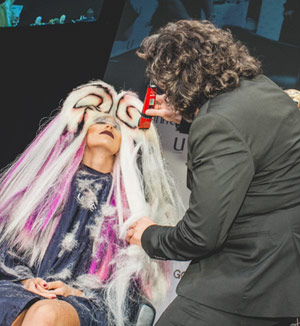 We caught up Jake Thompson, NAHA-winning hairstylist, photographer and all-around avant garde hair guru, at this past UNITE’s Global Session, to get some of his creative hairstyling advice and photo shoot wisdom. Here are some of our favourites:

—“You have to stand back from your work.” Look at the overall shape in your frame when shooting.

—“[Avant garde] doesn’t have to be ugly and extreme. It can be really pretty.” Go outside the box but don’t forget about the overall image.

—Get crafty. Thompson experimented with burning synthetic hair to create fluffy, piecey-texture. Playing around could lead you to a breakthrough. “It’s really hard to keep coming up with stuff that hans’t been done before,” says Thompson. He tries to set aside time in his private studio so he can daydream and experiment with new techniques.

—If you have an idea in your head that isn’t working out in real life, Thompson recommends waiting until you have the technical ability to properly pull it off. “Do it in a few years when they have the experience level to execute it really well.” Thompson says a lot of his looks didn’t turn out right at first.

—“Preparation is key,” says Thompson of setting up for a photo shoot. The hair, sets, the costumes should all be done in advance of shoot day. A lot of work went into creating Thompson’s “seven-layer dip” look that he finished onstage by shaving away layers of hair to reveal a colourful design underneath. 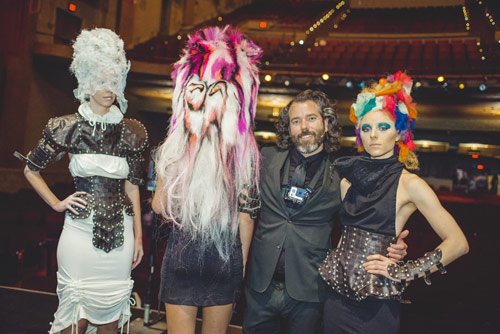 —When it comes to choosing a team to shoot with, pick photographers and stylists that get your vibe. “I try to choose people I get along with.” He also can’t stress the important of investing and finding a good model. “If you don’t have a good model that can sell your look I don’t care if the hair looks like Angelo Seminara or Trevor Sorbie styled it. If the model can’t sell the look, it’s nothing.” Aim to do minimal photoshopping. Make the lighting perfect and you won’t need to do as much, he explains.

—“Surround yourself with people that are better than you,” suggests Thompson. It’s the only way to grow and stay inspired.

—Thompson acknowledges that having your worked judged in a hair competition can be tough. “If you have the courage, I recommend doing it.” He says it keeps his passion alive, which is more important than getting paid. “It’s fun for me,” he says.

—When entering competitions, Thompson says patience—and persistence—is key. “I didn’t get nominated [for a NAHA] for seven years,” says Thompson. “You really have to have determination.” Success doesn’t happen overnight. “If you’re doing it for the fame…your’e doing it for the wrong reason. You have to do it for the love of the craft.”

Images from the 2014 Global Session, courtesy of UNITE