Hailing from the small town of Innisfil, Ont. (with a population of less than 40,000), Robynn Graham has hairstyling in her DNA. Her great-aunt Suzie is the owner of the family’s local salon, Suzette’s, where Graham and her mother both work. 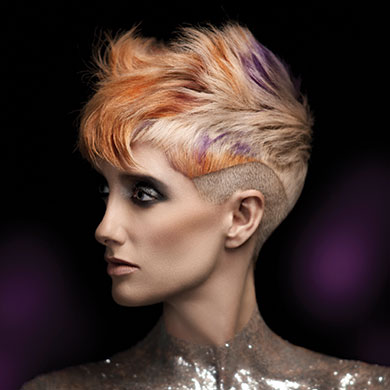 Though Graham has gone on to study in the big city (Toronto) with Aveda, it was her family’s European roots that inspired her Contessa collection. “I looked at a lot of European hairstyles,” she recalls. “I really like a lot of short, funky looks; stuff that’s not on the streets and not your everyday look.”

Using three of her clients as models, Graham also got an opportunity very few hairstylists get when working on photoshoots: She cut their hair!

“I was really lucky,” she says. “They had shoulder-length hair and were totally OK [with cutting it]. A lot of my clients get excited when I try

While Graham knew exactly the types of cuts she wanted, she was more indecisive about colour. “On one model I wanted to go a deep red, but at the last minute I ended up cleansing it out to make it softer because I thought it was a bit too bold.

It ended up being a faded strawberry colour,” she says. “For the other model, I wanted to only go with purple, but I ended up adding some copper and it kind of took over, but it flowed better [with the rest of the collection] and ended up working in my favour.”

With so much change happening on prep day, Graham admits that the process was stressful but credits her photographer, Giancarlo Intini, for helping her through it. “Giancarlo was amazing. He really helped me out for my first-ever photoshoot, giving me a lot of tips and tricks as to what would work well in front of the camera,” she explains.

So much so that Graham is already gearing up for her next competition and photoshoot—which is for the next Contessas!