A Recap of the 2018 Contessa Awards

The 29th annual Contessa Awards took place at the Westin Harbour Castle Conference Centre on November 12, to celebrate the biggest night in Canadian beauty in honour of some of the industry’s best talent. 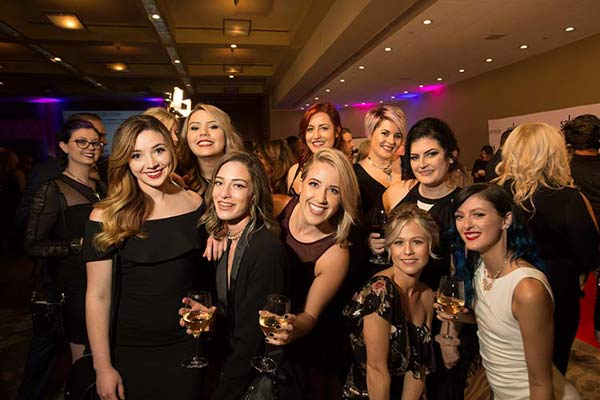 The event kicked off with a cocktail party, which included a red carpet hosted by our editor-in-chief, Anna Lee Boschetto and hairstylist Steve Roy. With a Salon Magazine backdrop and celebrity-style set-up with photographers and bright lights, it was one of the main atttractions of the room that guests flocked toward in hopes of taking their photos and selfies.

In the middle of the room was the piece-de-resistance—the Contessa 2018 finalist collections, laid out for all 1,000 guests to see in anticipation before the awards ceremony.

Mid-cocktail party, our barber competition in partnership with Movember began. This year, the Contessas partnered with Movember (the world’s largest men’s health organization) to raise awareness about the importance of men’s mental health, promoting their program in which barbers can become “Movember certified,” and spot the signs of clients struggling with mental illness—ultimately putting a focus on the importance of stylist-client relationships.

The competition featured three barbers who styled mustaches for their models. Guests were captivated by the live competition—with flashes from their cameras and smartphones as they cheered on the barbers. Each barber chair featured a specific hashtag, encouraging guests to vote for their favourite look on social media.

After the Contessa gala dinner, the show began with a hilarious video spinoff of Carpool Karaoke, which included our host Bill Rowley and publisher Laura Dunphy. Guests laughed and cheered as Rowley walked on stage concluding the video segment.

Rowley began the show by commemorating hairstylist and friend, Johnny Cupello (a Contessa 2018 finalist for Canadian Salon Team and Session Hairstylist, who was unable to attend due to health reasons), with a heartwarming speech.

As the night progressed, winners were announced and greeted with cheers as they took the stage to deliver their inspirational (and often emotional) acceptance speeches.

One of the first winners was Michelle Finlayson, who took home the award for Master Colourist for the second year in a row.

The next set of winners followed and the Texture Hairstylist of the Year award was presented to Robin Bacon, another Contessa 2017 winner, who was very humbled and congratulated all Contessa finalists and entrants.

Silas Tsang took the stage to accept his first win of the night for Elite Master Hairstylist and spoke about his 30 years in the industry.

The first presentation by Wella Professionals was a spin on ’20s music and fashion. Two flapper-inspired models opened the show, paving way for their retro-themed looks, which would showcase the various eras of fashion and hairstyles. Other looks included short bobs with sharp lines and bright-coloured hair and fashion on models in an interpretation of ’60s and ’80s style.

Following the presentations was the next set of awards, including the Fan Favourite award, which was presented to David Vendittelli.

The Allied Beauty Association’s Alain Audet and Aldo Gemmiti took the stage to speak about the importance of giving back to the community, and presented the John Steinberg Award for Community Service to Studio H, in London, ON.

“This award goes to my friend John Steinberg, who met me one year at the ABA one year in the hallway, who told me ‘take it from me, take it on,’ so I dug into my charity work and created an event to give back to our community for children,” said Heather Wenman, owner of Studio H.

Moroccanoil was next to take the stage with a presentation featuring a broad range of pastel colours and textured fabrics, including faux fur and tulle. With a primary focus on textured hair, each model wore clothing that matched their hair colour—creating a vibrant visual for the audience.

As the remaining set of winners were announced, Silas Tsang took the stage once again to accept the big award of the night: Canadian Hairstylist of the Year. Dragonfly Salon & Spa in St. Thomas, Ont. took home the award for Canadian Salon Team of the Year.

Congratulations to all Contessa 2018 winners and thank you to our sponsors for all their continued support.