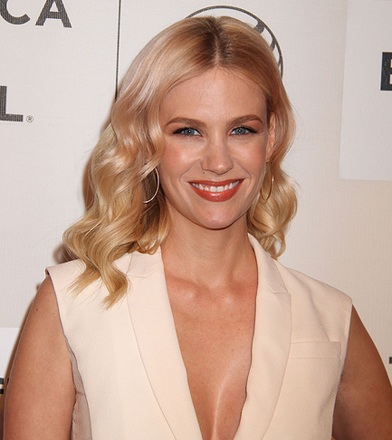 Actress January Jones—best known for her role as Betty Draper on the hit TV show Mad Men—has been named the new face of Kérastase’s Nutritive line.

The brand’s bestselling line of nourishing in-salon and home care treatments has been revamped this year to include the Protocole Immunité Sécheresse Systemé, an in-salon system with new Systemé Nutri-Capture technology for long-lasting nourishment and softer, more managable hair. For home care there is the new Créme Magistrale leave-in balm, a styling cream for smooth, supple and shiny hair.

In an interview with Jones, she opens up about the importance of hair, both on- and off-screen.

How is your hair an important communications  tool for you?
I tuck my hair behind my ear frequently when I am nervous, anxious or even excited. I often have to remind hair stylists not to leave my hair down around my face for red carpets because it will inevitably be tucked sooner or later.

In my roles, I think hairstyle and colour play a very important part in the roles I play. I always try to collaborate with the hair stylist about what my character would have and I try very hard to not let vanity stop me from making  a realistic interpretation. Hair, along with makeup and costumes,  is a very exciting way of forming a visual idea of a character before you even say anything. It can also really help me to feel like a different person.

In which shows or films have you used your hair  the most to communicate?
I have had my hair every shade of the rainbow. I think because it was a period piece and it was the character I played the longest, Betty in Mad Men was the role where my hair was used to tell its own story. It was in the late ’50s/early ’60s style. We had it in a regular set most days but there were moments when Betty was feeling so sad that her hair looked sad, too. The episodes where Betty was trying to find herself again and she died her hair black were really interesting. I also had to dye my hair black, because I was wearing prosthetics on my face and the wig wouldn’t work. It was an interesting experiment at work and in my personal life. I felt I wasn’t noticed as much as I am when  I am blonde. I also had to wear more makeup to avoid looking washed out. The reaction Betty’s family had to her change wasn’t very positive either. It’s funny how a hair colour can change so much. The Rome episode of Mad Men was also a fun hairstyle. Betty styled her hair in a more dramatic Fellini ‘When in Rome’ style that was so cool—heavy but fun. There was a nylon ball my hair wrapped around to make it bigger! 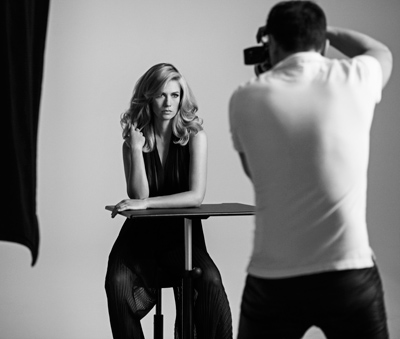 In your opinion, how important is hair  to a woman’s self-confidence?
Confidence and liking yourself have to come from within. You have to be happy with who you are and the choices you make. You have to keep pushing yourself to make interesting decisions and surround yourself with people who love and support you no matter what. Sometimes it takes a lot of courage  to fight for what you want or don’t want and I think that lends itself to confidence.

I am so proud to be a part of history where woman are kicking butt, taking names and working on being a better support system to each other. Ideal beauty comes with the glow of loving yourself, accepting your own flaws and laughing a lot.

Favourite Kérastase Nutritive product?
The Masquintense for fine hair. I try to use it twice a week after I shampoo. I leave it on for as long as I can and it’s a game changer. It’s helped me for years to maintain healthy hair in the stressful hair environment that is my job. I ask a lot of my hair.

Favourite ways to maintain hair on the go?
I always pack my own Kérastase shampoo and conditioner and then on the plane, I spray water or rose water on my hair and face to keep hydrated—plus, it’s just refreshing. I sometimes put my hair in a French braid to keep it contained and have a nice wave when I arrive.