Behind the Scenes with Moroccanoil at Contessa 2018 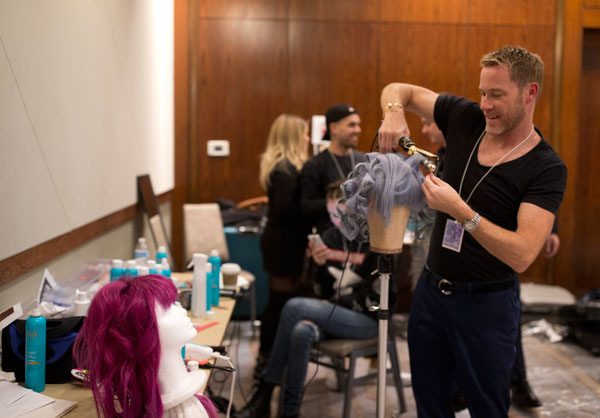 For the 2018 Contessa Awards, we asked our audience: “What Inspires You?” And for Team Moroccanoil’s presentation, their source of inspiration was avant-garde fashion designer Thierry Mugler and one of his vintage runway shows, which featured models in colourful tulle ball-gowns.

“We wanted to talk about the power of pastels,” says Kevin Hughes, artistic director for Moroccanoil. “Women aren’t afraid to lighten their hair anymore and I just love how people are using colour in so many different ways. It’s sort of like a liberation.”

With a whimsical take on pastels, Moroccanoil’s colourful presentation included nine women and two male models. “Guys are left out so much of the time, so we wanted to make sure to incorporate them while adding a bit of colour and do something different with their hair—something fun and exciting,” says Hughes. “One of the guys was already a really light blonde, so we added a light pink extension so it’s an androgynous, faux-hawk style. The other guy has long, dark hair so we added purple extensions to add a pop of colour.”

The Moroccanoil team customized each of the featured look, including a yellow Marilyn Monroe-inspired, voluminous bob, along with adding braided extensions to a top-knot style updo, and showcased airy, textured looks. “I know a lot of people like to have a very unified feeling throughout [the show], but I like to give people a lot of looks for the hair and unify it with the clothing,” explains Hughes, who incorporated tulle and faux fur into the presentation’s playful styling. “We’re recreating looks while putting our own twist on them.”

Moroccanoil also presented at last year’s Contessa Awards and according to Hughes, it’s all a celebration. “My passion is editorial hair. The Contessas are all about celebrating the hairstylist and the tremendous amount of work that’s put in. For me, it’s everything,” he says. “I love that we’re able to really showcase hairstylists, and the fact that we, at Moroccanoil, get to be part of it is really exciting. We hope people gain a bit of inspiration from anything we bring.”

Hughes adds, “I wish I could sit out there the entire time [to watch the awards show] because it’s really fun to see everyone’s excitement. You can feel it—it’s really heartwarming.”