A Peek Inside Studio SoLara

Here’s what it takes to launch a salon to interior success. 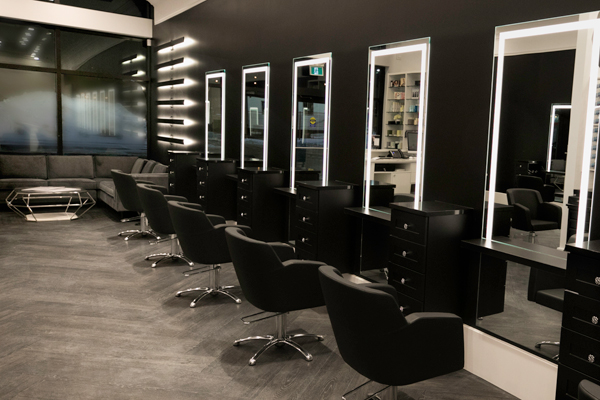 As a hairstylist for the past 15 years, Lara Leckie had worked in a number of salon environments, so when she set out to open her own salon, she knew she wanted it to be different. It was so different, in fact, that she was regularly asked by clients how she could possibly improve on her flagship space. But, as with hair and fashion, interior design can be influenced by a myriad of factors.

For the Guelph location of SoLara, Leckie was inspired by salons she’d seen on a 2016 trip to Stockholm. “I saw very modern, ornate and dark interiors, which I thought would be a challenge to include in a salon, and it was,” she says. To offset the dark walls, lighting played a major role, and a team of designers crafted ring lighting for each station around the mirror, which lit people from the mirror rather than overhead. “We learned really quickly from our Kitchener location how important lighting is in a salon, too, so that really helped us customize each station.” Even though the walls are black, Leckie loved the art gallery feel, and the design team infused plenty of brightness to the space with the addition of two-foot white crown molding and white baseboards to outline the perimeter of the salon. 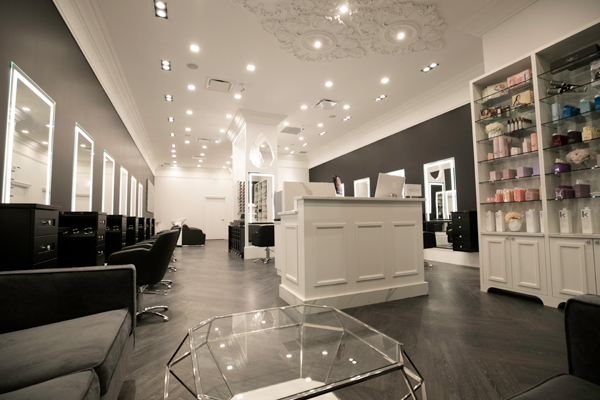 The Importance of Distinction

Along with running a successful salon, Leckie is also building a brand, which means she is keenly aware of the need to create locations with their own distinct atmosphere. With that said, she understands the need to keep common elements that unite, and you’ll notice an attention to these details the moment you step onto the rich herringbone flooring found in both locations. “We kept some design elements similar to connect the brand, including the artwork, which features the same statement piece in both locations, and smaller details, including the hardware on cabinetry.

When it came to designing a space that maximized colour and hairstyling, Leckie thought long and hard before settling on a colour bar, which has become the hub of the salon. “We created a colour island that has a metal trough in the centre for canisters, and it gets everyone more involved in the process,” she says. 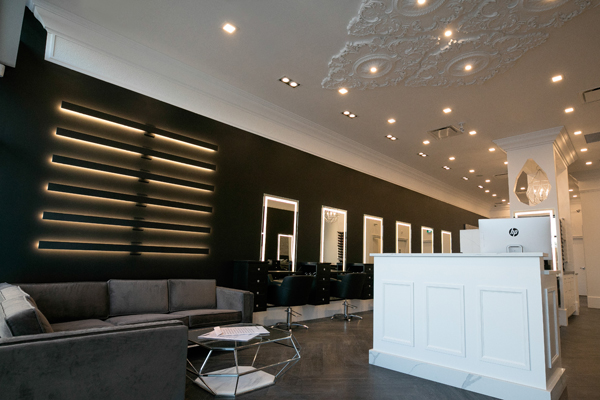 Creating an atmosphere where hairstylists work as a team is an important factor in making clients from all backgrounds comfortable when they walk into SoLara. So is the atmospheric distinction between the locations. “When I think of our Guelph location, I feel it attracts more of a hipster vibe,” says Leckie. With plenty of Torontonians making the move to Guelph, she says having the salon situated in an area with unique businesses, including local artisans, retailers and restaurants, affords it a cool city vibe. For Leckie, it’s all about the experience—for both her team of hairstylists and her clients from the moment they walk through the door.