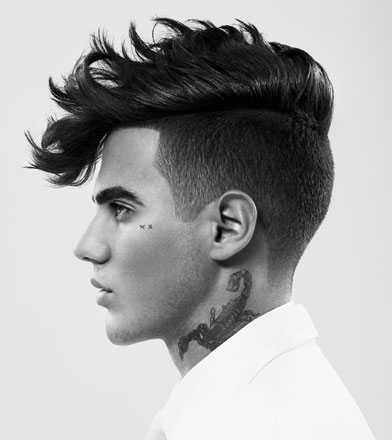 As one of the co-founders of Barber & Co, a growing brand in Canada, Ian Daburn “accidentally” found a creative outlet in competing.

In addition to being a Contessa finalist for Men’s Hairstylist of the Year, Daburn was also named one of the Canadian finalists at the 2017 North American Hairstyling Awards (NAHA). “It just felt like it was my time to shine,” he says. “I’ve done a lot of progressive work throughout the years, but I’m getting a little older now so I just wanted to test myself.”

A third-generation barber from England, Daburn actually began his career as a hairstylist and spent more than a decade working for Toni & Guy in London. “I remember spending every day off at the academy just watching and learning,” he recalls. “Then I worked my way onto the Toni & Guy education team and became one of the educators.”

“My biggest mentor has to be Anthony Mascolo. I used to help him behind the scenes at photo shoots. I grew up as an amateur photographer, so he really helped me develop my photographic work.”

It wasn’t until the year 2000 that Daburn moved to Vancouver to help bring the Toni & Guy franchise to Canada and opened his own shop, iDaburn Salons, before launching Barber & Co in 2011. “I’ve been keeping a close eye on men’s trends as they have been progressing bigger and bigger. It’s unbelievable,” he says. “I feel blessed that I got in at the right time.”

While many hairstylists find inspiration from the shiny youth of today, Daburn found himself inspired by something darker. “I wanted to portray good-looking young men that spent many years in youth detention programs but had a chance to re-establish themselves in society,” he explains. “My idea was to put them in front of a white background in white suits and have a little more of an angelic feel, but you’re still seeing their past in them with their tattoos.”

For the hair, Daburn took a softer approach to traditional barbering and incorporated men’s hairstyling techniques he has mastered throughout his career. “A lot of the work that inspires me comes from London,” he says. “I’ve been seeing the trend of the 1990s coming back and the reinvention of it. So, I thought I would just show a strong, edgy version, something a bit more on the extreme side, and then I wanted to do a commercial version, just to show everyone that you don’t necessarily have to wear these styles so strong.”