A leader in men’s hair and grooming, American Crew is celebrating a quarter-century milestone this year. 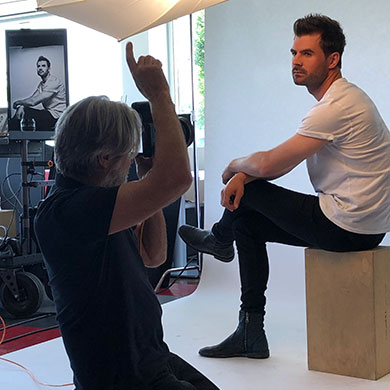 On the heels of the brand’s 2019 All-Star Challenge, founder David Raccuglia travelled to Toronto for a special two-day event on June 25 and 26, which included the opportunity for a few lucky barbering and hairstyling teams to work one-on-one with Raccuglia on a photo shoot.

To kick off the event, an intimate cocktail reception was held at the Toronto-based Glassbox Barbershop. Co-owner Peter Gosling spoke of how proud he was that his barbershop is now an American Crew space, because the brand not only resonates with his team but also his clients. Gosling and his team cut and styled models before photographing the looks with Raccuglia.

When opening up about his own creative inspiration, Raccuglia credits the men in his family. “When I think about what I love about men’s grooming, I think about my Italian uncles who were always very overtly styled in every way, and I always felt that was very cool,” he says.

Though he recognizes the shift in men’s hair to longer, looser styles, “Short hair won’t go away, but there will be more texture, and products that will offer slight shine rather than more,” he says, adding that grooming products are booming, with beards becoming increasingly popular.

Along with men’s grooming trends and product development, Raccuglia also spoke about the evolution of barbershops as spaces that are more inclusive, focusing on giving every client an exceptional experience regardless of gender. 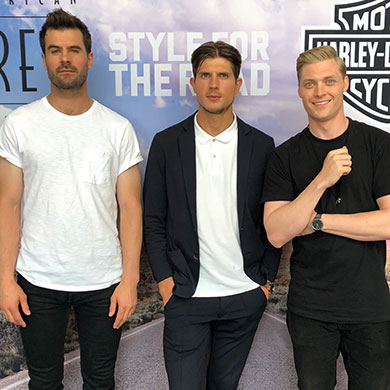 The next day, he led a presentation about the brand’s history, milestones and iconic imagery. “We’re about classics first. We can’t just come out with products that are wildly overt and don’t have relevance in a grooming regimen that we’ve created,” he says. “Recognizing that we need to make changes keeps the ball moving up the field. Falling into any sort of complacency with grooming means you’re going to stay there, and that’s not what we’re interested in. We’re interested in making this category bigger.”

During the second half of the day, three teams from local barbershops and salons each worked with a live model—cutting and styling hair for a one-on-one photo shoot with Raccuglia. The teams included Rob Rutledge from Al’s Barbershop in Brampton, Ont., Jason Culala from OGX in Toronto, and #TeamAllStar, which featured the 2019 All-Star Challenge Canadian winner, Sandra Perovic from JD’s Barber Shop in Vancouver, and first runner-up Andrew Soares from Fiorio Square One in Mississauga, Ont.

The opportunity to shoot with Raccuglia is quite rare—generally reserved for American Crew’s All-Star Challenge country winners. As a photographer for more than 20 years, he shared his wealth of knowledge, including directing models on their poses, and provided the hairstylists with helpful tips for selecting their photos.

“As a barber or stylist, you get directed to the hair. But as someone who’s been doing this for years, [David] directs himself to a story of the photo,” says Culala. “Choosing photos that had a lot to say. That was very interesting.”

American Crew released a special-edition coffee table book for their 25th anniversary! Stay tuned to find out how you can win a signed copy by David Raccuglia.