Check Out the Chic Ambiance of Vancouver-Based Salon, GLOSSALON 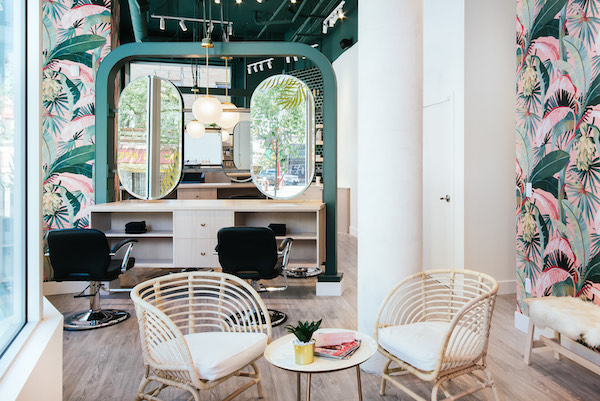 Take a look inside this Vancouver-based space that brings the ambiance of the Beverly Hills Hotel to life.

After 10 years as a hairstylist, Erin Goodridge was looking for something to affirm her career in hair. After her uncle suggested that she open her own salon, the idea for GLOSSALON was born. “I can honestly say that it wasn’t something I’d ever thought about doing,” she says. “As soon as he said it, I realized that I would have the opportunity to create my own environment.”

After five-and-a-half months of construction, GLOSSALON opened in June 2019. Although the construction was stressful at times, Goodridge says she enjoyed the overall process. “I was lucky to have a great contractor from Cleanline Finishing, who managed the whole thing for me, because I was still working full-time behind the chair,” she says. “My uncle is also a commercial plumber, so I had a really great team.”

As fun as the idea of building her own salon was, it was only natural that Goodridge and her team ran into a few bumps along the way. “Once you start building and getting into it, you realize that some things go wrong and aren’t working out how you planned,” she says. “One problem we faced was that our sinks sit on the top of the room with all of the electrical for the entire building, and obviously water and electricity don’t mix. We had to figure out a different way to pump water up and over in order to keep our design the way we wanted it.”

All In The Details

For the salon’s design, Goodridge was inspired by the famous Beverly Hills Hotel and worked with interior designer Christa Robinson to bring her vision to life. “She was able to step in when I wasn’t able to decide,” says Goodridge, who adds that her number one priority was to create a space that was different. “In Vancouver, there’s a lot of that west coast contemporary design; everything is white, grey and neutral woods, which is wonderful, but I wanted something unique. Overall, the salon is very warm and peaceful, and  just a really fun.