Check Out The Chic & Earthy Interiors of Medulla & Co. in Toronto

Luis Pacheco originally planned on relocating his salon Medulla & Co. (formerly known as Hair on the Avenue) in 2019, when the building he was in for 14 years was sold to a developer. 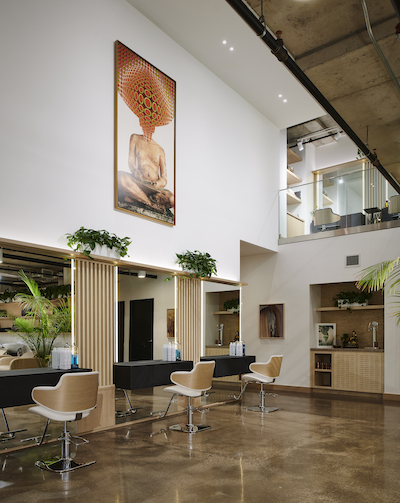 With the hopes of staying within the same area (in Toronto’s Yorkville neighbourhood), he stumbled across a building that was around the corner from his previous location and designed by Hariri Pontarini Architects, who are known for their work on the Royal Ontario Museum.

“It was a beautiful space and the bones of it were already there,” says Pacheco. “There are 20-foot ceilings with a very lofty design, and mezzanines that open onto the reception and styling areas.”

However, once the pandemic hit, construction was delayed and resulted in an opening that took place more than a year later than anticipated. However, it turned out to be a blessing in disguise since Pacheco says it gave him the time he needed to create his ultimate dream space.

While his previous space was in an old Victorian home with a design that he describes as “being in an old Colonial brothel/jewelry box,” Pacheco wanted to take a more holistic approach with his new salon.

He reached out to his friend Anwar Mekhayech, who owns DesignAgency, a Toronto-based design studio that typically works on large hotels and restaurants. “I always called our old space the anti-salon because while I love my craft and what I do, I don’t necessarily like the aesthetic of the traditional salon with all the posters and branded things,” he says. “I’ve been doing this for 30 years, so I have a pretty good understanding of how a salon should operate, and it was just a matter of collaborating with someone who understands design. He really came through and built this incredible space. It’s like a sanctuary; a temple. The vibe is sort of desert meets Japan meets church. It’s very zen, warm and minimal. Very comfortable.”

From its meditation hallways and benches to the salon’s two sound systems—one for a curated selection of music and another that emits a 528-hertz frequency, which is meant to connect with guests on a metaphysical level—to the self-affirmations and some of Pacheco’s own photography displayed in the bathrooms, the space has been designed to help people feel good from the inside out.

“A lot of time when people come to the salon and want to change the way they look, it’s based on an emotional disconnection; they just want a pick- me-up,” says Pacheco. “For us to really feel good, it starts from within.”

Keeping a more open- concept space in mind, Pacheco was inspired by the design of Wella’s Studio TO in Toronto’s Liberty Village, and even reached out to them for ideas on specs for his stations’ distancing, lighting, etc.

While Pacheco focused on keeping the guest experience top of mind, he also wanted to create a space that inspired creativity for his staff.

“I’m not one for clutter or for being in a crowded space; high ceilings and vast space allows you to tap into your creativity more freely, so being in an open-concept area allows me to dream a little bit more and think outside of the box,” he says. “Harmony, space and balance create a sense of peace within me and others in the salon without even realizing it.”

Creating a space with a communal design that enabled his staff to feel more like a team was also important to Pacheco.

“Even though we have departments that are compartmentalized—we have our colour room on the second floor and styling area on the main floor— you can still see what’s going on and still feel like you’re part of a salon as a whole, and not so secluded as we were in our previous space,” he says. “Where I work, I’m on this mezzanine so I can look down and see what’s happening in every corner of the salon. It’s a great vantage point.”

While the salon’s interior design was top of mind, Pacheco also wanted to keep the outside looking just as beautiful. “One of the biggest attractions at our old salon was a backyard with trees and shrubs, so that was important to me to bring that vibe to the new location. I hired a plant stylist to bring in greenery and shrubs, so it’s like an outdoor living space within the salon.”

Keeping nature in mind is also reflected inside the space, with the use of eco-friendly materials such as recycled paper stone, and the implementation of a more sustainable water filtration system that removes metallic buildup while offering 30 per cent more pressure with 80 per cent less water.

While 80 per cent of the salon’s furniture is custom-made by Top Notch Cabinets, Pacheco sourced eco chairs from Maletti for all of the stations, and reupholstered his old mid-century modern sofa to give it new life.

When thinking of his staff, he wanted to create an environment that was designed to be more user-friendly and efficient. For example, the sinks feature reclining chairs with the colour bar positioned behind them, which was a departure from his previous salon.

“Before, our sinks were in one area and the colour bar was in another, but now everything is more of an intuitive experience for the staff,” he says. “For the colour bar, I built one that’s larger with everything that’s easily visible and reachable. It makes it easier for formulating and reordering because it’s important to me to be fully stocked with every shade available because those are the tools we need to create and have a successful result.”

As for the salon’s retail area, Pacheco says the idea was to create a more jewelry-inspired approach with a curated range of product that’s displayed on a table instead of a shelf for an immersive experience.

“I didn’t want a reception area to look like a retail store,” he says. “I didn’t want to have a huge retail space because I believe in using great products and finding what works for you.”

While Pacheco’s favourite area is where he works, he also enjoys the lounge area he’s created within the salon that features a sofa, two chairs and a table. “At the end of the day, we’ll reconvene there and talk about our day,” he says. “There’s a guitar so sometimes I’ll pick it up and start playing songs.”

“We’re in a time where we’re lacking experiences. We’re at home and going into work if we’re able to but we’ve been so limited as far as human contact, so going to a salon is an outing and experience. What better time to elevate that experience to something you’ve never seen or felt before?”