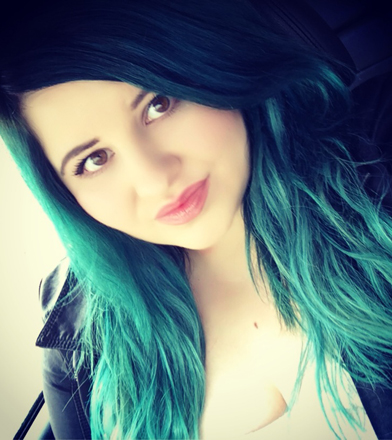 Chantel Allen, Hair Extensions Artist of the Year winner, has been working with hair extensions since she was in high school! We caught up with her to learn about her inspiration behind her avant-garde collection, and to learn more about her creative process.

Chantel Allen: Ever since my mom gave me the dreaded mushroom cut when I was seven, I knew I wanted to do hair for a living! When I was 12 years old I used to lock myself in the bathroom and pretend to have a shower while I would actually be colouring my hair. I would often get grounded but it was okay because I had cool hair! I had a new hair color every week – I was obsessed!

SM: Where you do find your inspiration?

CA: For colours, I look to people, nature, and Pinterest – my ultimate favourite work I’ve done was inspired by the ocean. For styles and/or hair pieces, I obsess over fashion shows (runways) – I would never wear the clothing, but inspiration wise, I’ve created some original pieces thanks to a few high end fashion designers.

SM: What’s the next milestone you want to achieve in your career?

CA: I would like to do more commercial work in 2016, and win another Contessa!

CA: GO WITH THE FLOW. For one of the shoots we did for the competition, I was extremely frustrated and upset that the idea I had in mind wasn’t working as planned. After a small break, my team and I decided we would just “wing it” and see what happened. It was a compete 180 from what I had in my mind but once I let go of my original plan, I was free to be creative which ended up with an even better result than I could’ve hoped for.

SM: What was your process for planning your collection?

CA: There were a few photos sent back and forth between my photographer and I, and we ultimately decided on a “Disney Princess” theme. Once that was decided, we planned out ways to distort the concept to make it very avant-garde and different. We didn’t over plan – we had a basic concept and let our creativity pave the way the day of the shoot(s).

SM: Who’s the first person you called when you found out you were a Contessa finalist?

CA: I called my photographer, Shelby Deep, as soon as we won! We both worked insanely hard on this project and I was thrilled to tell her that our hard work paid off! Unfortunately she was already asleep so she didn’t find out until the next morning!