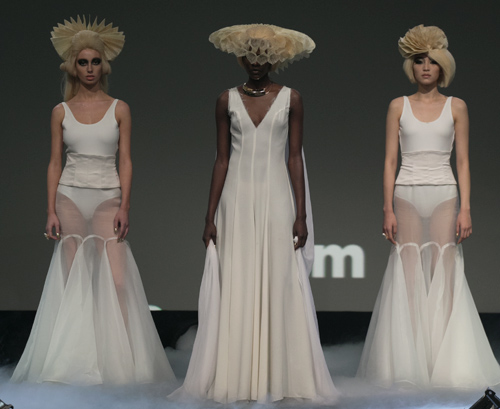 With a conscious vision for the future, Kristjan Hayden, creative director for Aveda Canada, led his team in creating a stunning presentation at Contessa 2017. Paying homage to the world’s bee population, Hayden explains how the Aveda team created the intricate avant-garde headpieces that brought their vision to life.

Salon Magazine: What was the inspiration for the presentation?
Kristjan Hayden: The particular segment that we presented at the Contessas was called Everything is Connected. Part of Aveda’s mission statement is to care for the world that we live in. Right now there’s a huge threat to the bee population. They are responsible for pollinating a huge part of the world’s food supply. Obviously it’s a huge issue so to tie it back to Aveda’s mission statement, we really wanted to do something that focused on caring for the world that we live in. Something Ray Civello had told us was that the founder of Aveda, Horst Rechelbacher, had a real love for angels. We were saying that bees are sort of like the angels of the earth and for all that they do for us, so we decided to make what we lovingly coined as ‘angel bees’ out of our models on stage. It was really to honour the memory of Horst, bring attention to this issue of the bees and to create something visually that was different and interesting to hairstylists.

SM: What techniques were used to create the headpieces?
KH: All five of the looks were using the same honeycomb technique. Once we created the pieces, we made different shapes and sizes of them. Some of them we flipped upside-down, so it looked more like a fan on top of the head and the honeycomb texture was seen in the back. So we really just played with positioning of them and sizing of them to create all those different looks. The honeycomb headpiece texture, which I hadn’t seen myself anywhere else before and from the feedback we’ve been getting from a lot of people, it was something very unique that they hadn’t seen before, either. 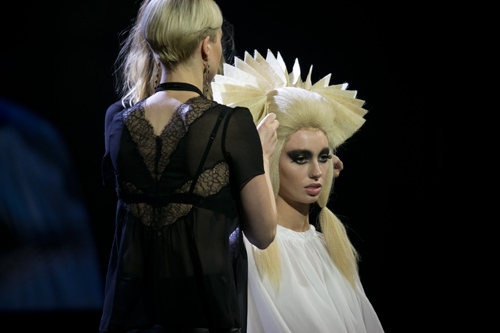 Earlier this year, I had been thinking about honeycomb texture and looking for a way to create that honeycomb texture in the hair. The hair paper technique is something that has been out there for a while, in which you make sheets of fabric out of hair that’s very similar to a piece of paper or fabric. We used hair clippings and hairspray then ironed it with a clothing iron between two sheets of parchment paper. You have to start with a really firm piece and then we designed shapes from that—cutting out meticulous little pieces and gluing them together until you end up with a piece that fans out like an accordion and represents a honeycomb texture. Depending on what kind of a shape you want, you cut out a shape and then you create multiple pieces that are the exact same shape. If you glue them together in different spots, then when you pull it apart they are all connected, but kind of in a zigzag, honeycomb shape. Once we got the idea down, it was our assistant creative director, Melanie Whitmore who spent hours and hours meticulously cutting out each tiny, little section and gluing it together so it really was the perfect execution. 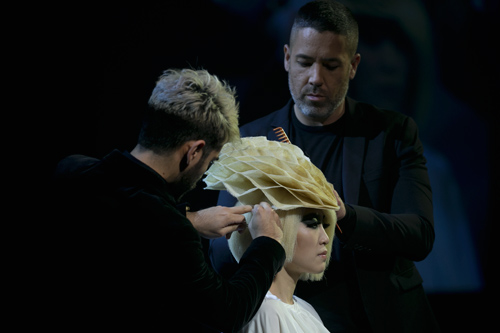 SM: What does it mean to you to be part of the Contessas?
KH: It is always an honour to be part of the Contessas because it has such a rich history in this industry and in Canada. It is so well respected. I’m from Winnipeg, originally, and from the first time I started doing hair and just seeing Salon Magazine at the salon I was working at, and looking through it, for me it’s amazing to, after all these years, be at the Contessa Awards doing a presentation. There’s such a rich history and I know that it’s so well respected within the industry. I think all of us on the team realize that and what an honour it is to be a part of that Canadian industry tradition.

SM: How was the theme of the future incorporated into your presentation?
KH: We really wanted to take a spiritual and holistic approach to it; that we really have to realize that we’re all in this together and that is the answer to a healthy future. Survival and thriving in the future is based on realizing that everything is connected. Every action that we do has a reaction. The way we discussed it is that in order for the world to thrive and humanity to thrive in the future, we really have to realize that everything is connected. That, to us, if we just realize that love connects everything in the world, we really have more consideration for the planet and for the people on it, and that in turn will create a healthier planet and healthier relationships with people, and peace.