Contessa 2019: Q&A with Men’s Hairstylist of the Year, Christine Kelly

We spoke with Christine Kelly, who took home the Men’s Hairstylist of the Year award at the 30th annual Contessa Awards. 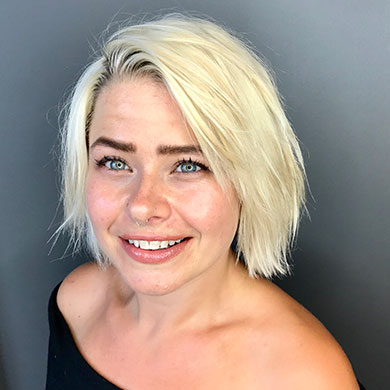 My idea for the collection was that I wanted to have men’s styles that people don’t see very often. I find that when I look at a lot of men’s hair, even in high-fashion, it’s all the same. So, I wanted to try something that was different and showed off my styling skills. Initially, my idea was a wet look; we were going to go for all wet-look styles. But throughout the day, it progressed into something different. I was really looking for something different and the possibility that men’s hair doesn’t always have to look the way that we think it has to look. Trying to branch out and get outside of the comfort zone of men’s styling.

I wanted to work with a very short-haired model, medium and a long-haired model. As far as men’s hair goes, we see all of those different lengths all the time. I wanted to show off my barbering skills, with a straight-razor fade—it’s something I really enjoy doing. The braids in the long hair; the ponytail, movement and texture were really interesting. I was just playing around with all the different textures and getting outside the norm of men’s hair.

I really wasn’t expecting a lot out of the photoshoot. I almost didn’t even enter. It’s surreal. It was my first time entering and my first photoshoot ever. It’s mind-blowing.

I would really like to take this award and get some advanced education and have some doors open up as far as education. A few years ago, I went to London to Salon International and I was really inspired by the Wahl men’s barbering stations. I watched for two hours, and one of the women there won [an award] and she was on stage and she looked so happy. She had endless opportunities, so I was really inspired by that. I really hope this can open some doors for me. I love to travel, and I know this can be the beginning of some huge things. Fingers crossed!

Your boss at Cutting Room Creative, Edwin Johnston, photographed this collection and is a big Contessa winner himself. Tell us about working with him.

Without him, [this win] would not have happened. I told Edwin the night before the photoshoot that it was my first photoshoot and that he would have to help me out. He was there to help it all come together. As somebody who has never done a shoot, to work with someone who has been doing these shoots for a really long time, he made it really easy. It was fun, and he’s really excited that he got to photograph my collection.

Who is your mentor or someone you look up to?

Obviously, Edwin is one. He’s a creative stylist, he’s got his vision and level of expertise. He’s always got a high level of workmanship, so that’s really important to me. He’s taught me a lot of things about men’s hair and detail work.

I also really look up to Matty Conrad. He’s been a huge inspiration to me as far as men’s hair goes. I follow him on social media.

How would you describe your style when it comes to photo shoots? Any special rituals/how do you stay on track/what’s in your kit?

I had all my barbering tools; straight razors, clippers and detail combs. It’s kind of go-with-the-flow. We had a model that wasn’t able to make it, so that was kind of hard to deal with, but at the same time, we had another model come in and take his place. They had totally different hair, but we just went with it. We worked with the mens’ hair and did what the hair would do. It wasn’t set in stone—it was very free-flowing. That’s really helpful to me, even in my day-to-day work, not to be too stuck on something and just feel it out. It worked out for us.

Before hair, I was actually pursuing getting into business school. I think if I wasn’t a hairstylist, I would probably pursue that in some way. Obviously, life just worked out. I got into a great salon out of hairdressing school. They have given me a lot of opportunities—[the Contessa Awards] is a major one. It’s been great. Definitely being in the creative world is where I need to be.

Advanced, hands-on education with the possibility for travel would be fantastic. I need to start planning out a photoshoot for next year and start collecting ideas for that.

I was really excited to receive this award from American Crew, because they offered some education. I really love styling men’s hair.