Contessa 2019: Q&A with Quebec Hairstylist of the Year, Joseé Renaud

We spoke with Joseé Renaud, who took home the Quebec Hairstylist of the Year award at the 30th annual Contessa Awards. 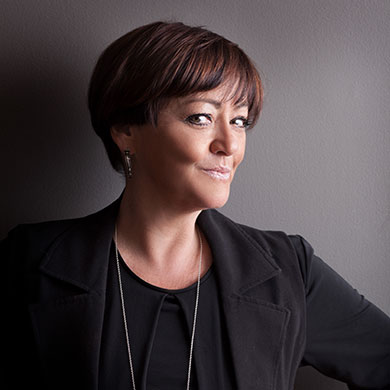 The collection is based on sfumato, a technique Leonardo Da Vinci used in many of his paintings, like for example the Mona Lisa, for softening the transition between colours. The background appears out of focus, while the subject is very clear. I like working with very defined, clear lines, in the haircut – I’m super inspired by the British – but I wanted the colours to melt between one and other. I was in the mood for something soft and subtle. When you create a collection, you need to work in many different areas of hairstyling.

“I created this collection to mark my 30-year career as a hairstylist. I have been working as an educator in this industry for a long time. It’s a beautiful achievement. I’ve entered competitions in the past, but it’s been at least five years that I hadn’t participated. I wanted to take a step back and study what others are doing. At some point you need to do that — and you need to look into other areas as well, like painting, for example.

Who is your mentor, or someone you look up to?

I am totally in awe of Mark Hayes’ work for the unbelievable precision he is able to achieve in his haircuts. Angelo Seminara’s creativity is always so inspiring. In Quebec City, Jacques Aubert has always been a huge influence on my work and career. He is my mentor and was the first Quebec hairstylist to go to London, in the sixties, to further his education and bring back new, innovative techniques. He’s 78 and he’s still working. Amazing!

How would you describe your style when it comes to photoshoots? Any special rituals/how do you stay on track/what’s in your kit?

Before anything else, I choose my models meticulously when I’m working on any photoshoot. I start by doing many, many sketches on paper and finding inspiring images that will guide the creative. Essentially, I’m building a book before taking any photos. I meet, at least, five or six times with the models beforehand because I like to get to know the person; it’s not just about getting ‘the right look’, but I really need to relate to the individual who will be portraying my vision.

For a successful photoshoot, I need to plan one year in advance at a very slow pace. It starts with an idea that I refine, and then it takes me about six months to produce the photoshoot and finish all the images. For this collection, I worked very closely with Alain Comtois, whom I didn’t know before hiring, but I felt he understood my vision, what I was trying to communicate artistically.

I’m pretty sure I would be a painter. It’s a very strong part of me. I love drawing, painting. It really is a passion. I became a hairstylist because my older sister owned a salon. It was a natural that that would be my calling, too.

My biggest goal has always been to share my knowledge with the industry. I love giving courses, education, and this is where I’m at now. It’s something I’m going to continue building. I’m also super interested in continuing to enter competitions, such as the Contessas. It elevates our profession, and I feel it’s so important right now when hairstyling is not attracting as many young people as it once had. We need to highlight the art of hairstyling again. Because it goes beyond the work you do in the salon. It really is an art form, and your material is hair. I want to share this with the younger generation. Motivate them and make them dream about what they can become.