Contessa 2019: Q&A with Texture Hairstylist of the Year, Simon James

We spoke with Simon James, who took home the Texture Hairstylist of the Year award at the 30th annual Contessa Awards. 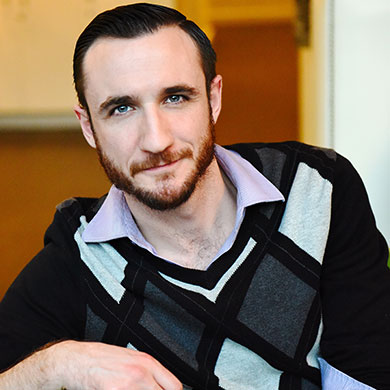 When planning [my collection] this year, I said I was going to jump in and do something different. I wanted to pay homage to one of my early mentors, Jon Paul Holt. He [created a collection] many years ago, based off of Isadora Duncan. I looked at some of the shapes and and tried to figure out how I could make it darker, moodier and more 21st century. I wanted to create interesting texture, but still have those classic, avant-garde-style shapes. So, I came up with the concept for my collection, which I called Shattered Elegance; something that’s beautiful, but I wanted it to be gothic and really moody and hopefully evoke some kind of emotion.

It was cool to be able to bounce ideas off of Jon Paul in the process of building [the collection]. For me, I’ve started getting good at finishing, but building and constructing a piece like that takes a different skill set. Whenever I was having a little bit of an issue, he had some great ideas and would throw me something that I hadn’t thought of and I could use that to create it and make it my own.

I don’t story-board. I used to when I was entering Color Zoom, but what I learned, especially with this collection, is to go off of your instinct. Build something, look at it and, if I didn’t like it, throw it out and start all over. The cool thing is it ended up being quite close to what I was envisioning. More than just the hair itself, I was focused on the mood and feeling of the collection. I just wanted it to be something that was a little different—with striking, moody images.

It means validation of all the years of hard work, and all those times I would sit and daydream. It’s important to me to win for styling. Colour was always easier for me and styling has always been my weakness. I had to work very hard to understand and execute great finishing. It means more to me to win in that realm as I had to work a lot harder for it. As an artist, it meant the world to turn a weakness into a strength.

I grew up in the hair industry, so I grew up looking at the magazines. I actually waited a long time to enter. I honed my skills and waited for my hands to catch up to my eyes. I already knew what it took to win, I just knew that I wasn’t quite there yet. When I finally decided to enter, which was for the first-time last year, I knew that I was ready. And I was lucky to make it to [make it to] finals last year for two categories. It was amazing.

In my mind, I was just happy [being a finalist] and getting to that table [at the Contessas]. So, when they called my name, I was like, ‘Wait a second, really?’ I actually had to hold back tears when I was on stage giving my speech. The first thing I did when I walked off stage was thought ‘How am I going to do this again?’ Right away, I’ve already started planning my next collection. I plan on entering every year of my career if I’m able.

Who is your mentor or someone you look up to?

When I first got into hairdressing, I used to look at people, like Jon Paul Holt, and his work. A lot of my family has actually worked with Jon Paul and I’ve worked with him, too. Growing up in the industry, all I ever heard was [his name]. I definitely would say he was one of my first inspirations. He took me under his wing when I was fresh out of hair school. I had the good fortune of assisting him. He taught me a lot about creativity and catering to clients.

In 2008, one of Edwin Johnston’s shots [in his Contessa collection] were one that inspired me to enter competitions. It’s cool that this year and last year, I had the good fortune of sitting at the table [at the Contessa Awards] with him. He and I have built a relationship, so it’s kind of one of these weird things where you’re looking at one of your idols one day and then you’re sitting at a table at the competition with them. And [competing] against people like Michelle Pargee and last year, Dana Lyseng. Having your idols become your rivals.

How would you describe your style when it comes to photo shoots? Any special rituals/how do you stay on track/what’s in your kit?
The strongest thing that I believe in, in my approach, is that you just have to be open to what’s happening on set that day. I think sometimes if we get too locked into an idea—I know that I’ve done this in the past—we force an idea we have in our heads. Sometimes, things don’t go your way and the hair doesn’t want to do what you were practicing. So, you just have to go with what looks good and be open to things shifting and changing a bit. And be open to people around you, and what they see. Who you have on your team is just as important as your vision.

As a kid, I always used to dream of winning an Oscar. I always wanted to be an actor. I got into hairdressing because I knew there was an avenue for stage work and educating. So, I got into hairdressing to fulfill that buzz of speaking in front of a group. I didn’t quite realize how good enough you had to be to get that job, but eventually you get there.

One of my biggest goals in the industry is to inspire the next generation of hairstylists coming up to pursue creative work. I’m trying to do a lot of that and tighten up the British Columbia hair community and getting us to become a squad again and be a force on the competition scene.

One of my biggest passions is educating. I’m an educator for Goldwell. I learned from Michelle Pargee that whenever you take a step up in your career, you have to look back and see who you can pull up with you.