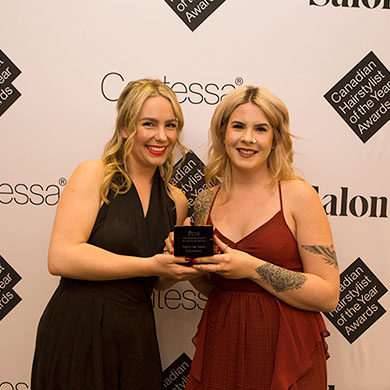 We spoke with Suki’s Hair Salon and Academy, who took home the John Steinberg Award for Community Service award at the 30th annual Contessa Awards.

Tell us about Suki’s Socials (the history of how and when it was started).

Within the people that I work with, I always say that it doesn’t matter how long you work with an organization before you have the ability to make a difference. If it’s a good organization, they are going to listen to your ideas and everyone should have a voice that’s heard.

About four years ago, one of my apprentices at the time, Karly Vincent, and I were brainstorming different ideas for Suki’s. She got the chance to see some different presentations, but we talked about organizing some demonstrations from different hairstylists and inviting hairstylists to come and watch. This was not just a Suki’s thing, but for hairstylists all over.

Karly’s father passed away from lymphoma, and my father from leukemia, so we decided that the money would be donated to cancer of the blood research. We picked the VGH-UBC Hospital Foundation. Since then, we try to do Suki’s Socials almost monthly—probably 10 per year. Britney Reid, our operations manager, now runs Suki’s Socials. Britney works her butt off getting people to commit days and getting people to show up, but we’re really lucky. People want to help any way that they can. We’ve raised around $35,000 over the years. I’ve been really fortunate.

At first, we would just ask everyone we knew, including Anthony Crosfield [from Union salon] who works two doors down from our salon. He’s an educator for Wella. We got people we don’t even know. Oscar Bond, who is a very famous hairdresser. We’re really lucky that way; that it’s taken on a life of its own with people wanting to participate.

If people are in town and want to do this, hairdressers will come and watch. Even though it’s our event, we want people to present to their [strengths]. So, we let them present what they want. For example, if Oscar Bond wants to do precision cutting because that’s what he’s about, that’s what he’ll do. If Michelle Pargee wants to talk about colour and photoshoots because she’s so good at that, that’s what she’ll do. We cater it to each person and how they want to present it. That’s also what attracts a different audience to each event.

Tell us about last year’s event.
Silas Tsang was going to be in Vancouver and I asked him if he would [participate]. On June 11, we invited local hairdressers to watch Silas do a [hair] demonstration. Entrance was by donation, with 100 per cent of the money donated to the VGH UBC Hospital Foundation. We raised $500. But to be honest, it isn’t necessarily about one night. We believe that it is important for manufacturers, salons, industry professionals and hairdressers to share ideas with each other. Silas’ presentation was one evening in a series of “Suki’s Socials” that we’ve hosted every month for the past four years.

Silas and his wife, Dorothy, are so lovely. After Suki’s Socials, we drove them straight to the airport. Silas is a Contessa winner and he won a NAHA a few weeks after the event. He’s the most creative and humble man. 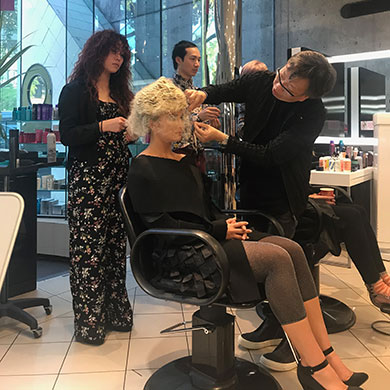 How does it feel to win the John Steinberg Award for Community Service? What does this award mean to you?

I had the opportunity to meet John because he was a friend of my mother, Suki. He was absolutely lovely and gracious, and of course I read his articles. It’s an honour to win an award with his name on it.

When I saw Karly and Britney [on the webcast], they were holding hands as they got up to the front [of the stage]. I thought it was adorable. The event is something they do together, and they are so good at. I’m so proud of them.

Why is giving back important to Suki’s?

Any way we can give back to the community—whether it’s volunteer work with a charity or giving back to the hairdressing community—I think it’s very important that you’re not just looking after yourself and the client in your chair.

What advice do you have for other salons that are looking for ways to give back to the community? How can they get started?

Sometimes you need more than just the inspiration to start it. Sometimes you just need a workhorse that will keep calling until somebody says yes, makes sure all the food is ordered, makes sure that when people are invited, they will be reminded about it. The motivation and the system to keep it going.

What’s next for you after your win?

In September, we did do one event [in our salon] with colour upstairs, cutting on the main floor, barbering, and various seminars going on all at the same time. That was really fun, so we might enter that one next year. It’s really a networking thing. There is definitely a benefit to meeting people in our industry and sharing ideas, whether they are part of your salon group or not. We already have our next couple of events planned, so we’re continuing to get it growing.