Contessa 2020: Q&A with Makeup Artist of the Year, Abie Hagerty 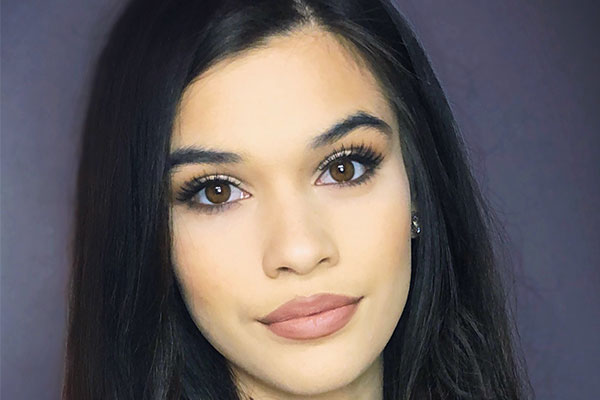 How did you come up with the concept behind your collection, what did your brainstorming process look like?

Because I moved away from Vancouver and was in an area where it’s strictly viewed that girls wear makeup and guys don’t, my one model who did the drag look was very intrigued by that industry. He really wanted to express himself. I never really thought that there were boundaries. Especially in the last year and the upcoming year in 2020, I feel like those boundaries are going to be broken and people are going to be more welcoming to everyone expressing themselves.

Can you break down each of your looks?

In my program in school, we did a drag day, but my model didn’t show up. I didn’t fail, but I just felt like I wanted to give it a go again. I pretty much just started out with his face at first and then I decided to go all out, so I did a lot of research on brow blocking, I didn’t want to mess up. So I practiced a lot for the brow coverage, even on myself because I have thicker eyebrows, and then when it came  time to do it, I just felt like I had a clear headspace of the actual base for the type of look that I wanted to do and then it eased my mind to kind of put the colours together.

I wanted to do something very blown out, but still more natural, which is where the yellow came in. A gold yellow highlighter had been coming more into style, so I wanted to incorporate that. I also didn’t want the look to have a strong lip just because I wanted it to be more muted but still pull it all together. I didn’t really plan on her being positioned the way that she was, I kind of wanted her straight on, but she just turned her head and the way that the gold highlight reflected in the light looked more authentic and worn in—and that’s what I wanted.

I had a Countess inspiration, so when I had the claws and the idea of how I wanted her positioned, it just fit with the sharpness of the eye look. It’s actually my grandma’s favourite look and she’s not really into anything edgy, but she loves that one. I wanted to incorporate a clean line with shading rather than more of a graphic liner, but I still wanted to have that effect. It was pretty much just trial and error, especially to figure out where that line would best fit. I was really pleased with how that came together because it’s hard to see what it’s going to look like in the end.

What do you most enjoy about being part of the Contessa Awards?

It’s great that you guys have a night where we get to challenge ourselves and be who we are as artists rather than what people are requesting from us. It’s also reassuring for people who work with us that we are as good as what we practiced to be.

What was going through your mind when you were selected for the Contessa award? How did you feel?

I honestly didn’t think that I was going to get it at all, just because it was my first year entering. I am established, but I’m not as established as my other competitors. I think it only really hit me when I was on the finalists list, just because this whole time, that was really my only goal. I wanted my collection to be out there for everyone to see, like how all the other finalists were when I was doing my Contessa research. It’s an unreal feeling, but it also is good because it gives you that extra push for the new year to keep going and have faith that I’m doing the right things.

Who do you consider to be the biggest mentor in your career, and why?

A lot of my mentors are people that I see on the internet. I really love celebrity makeup artists like MakeupbyMario, MakeupbyAriel, Patrick Ta. I have a binder where I organize research on each individual. I like to see how everyone works individually, and that helps me reflect on who I am as an artist, and that makes me feel like I have a place in this world.

I want to start going to more courses. MakeupbyMario has master classes, I do want to go to one of those this year, that would be so great, especially because of how big it is. I also want to go back to school and do a full special effects program just so that I can say that I’ve dabbled in between all areas of this makeup world.

What’s next for you? What else are you hoping to accomplish?

I do actually want to start being more active in photo-based submission competitions. I found a couple of other international beauty awards where it’s more makeup focused, just because Contessa is more hair focused. With Contessa, you challenge yourself, so I feel like I did learn so much throughout the year of shooting and planning it.