Contessa 2020: Q&A with Nail Artist of the Year, Olga Khazova 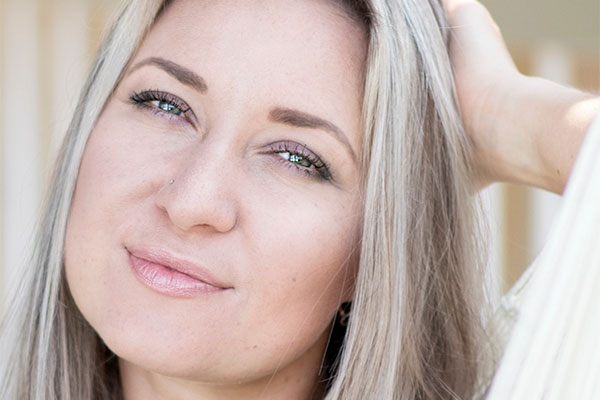 How did you come up with the theme behind your collection?

I first start thinking about a theme and decided to make it a hat, so I wanted to match the nails to the style of the hat. When I have an idea, I try to put it on paper and see how it looks on its own and how it looks together. Because I did this work before New year, so I wanted them to be sparkly, but not just sparkle, also elegant, so it has some abstract design. I also love flowers, so I also wanted to put a little bit of that in as my signature.

Can you break down the inspiration and thought process behind each of your looks?

So, the first picture I did was kind of vampire style and more extravagant. The hat was with lace, so I was trying to match that level of extravagance. I put a red nail and wanted an accent and thought it would match well with the lipstick. Because it was a sharp look, I thought that matched with a strong woman who’s confident, so I made the nails sharp and extravagant.

With the beach hat, it’s kind of a soft blue for women who are relaxed and happy. It’s glamorous. This is also my favourite shape, it’s a Russian almond, I wear it all the time and I think it looks very elegant, but no too simple.

I didn’t put the top of the hat in the picture because it didn’t look very good. I wish I could show the whole picture. Yeah, you could see just pieces of feather coming from that. And It was going for more of an older, European style. It is elegant too, but it’s different.

When looking back, do you have any regrets or changes you’d like to make?

I’d change a couple of things. My first one was harder than I thought it was going to be, so I changed a couple of things when I was working on it.  But the rest were good to go. I was very happy with this entry. But I’m always happy because I would not send them if I wasn’t. I usually I don’t have difficulties when I’m planning. But I’m never 100% happy with my work, I’m very picky. When I’m in the artistic process, if I think of something in my head, I will write it in my notes. This way I don’t forget about it when I start working on the model.

How was your experience at this year’s Contessas?

“I really like the atmosphere there and the people. We’re all artistic and it’s nice to be around people who share the same passion about beauty as you. Two years ago when I went I was so afraid to hear my name because I was by myself and I thought, ‘How could I go on the stage? What would I say?’ I was so stressed. But this time, I came with my husband and I was calmer about it. It wasn’t stressful and everything just happened so quickly. I was glad that I could be there when I won. Everyone was also so friendly. I didn’t feel like I was by myself anymore, so that made it much easier. I felt like they cared about me.”

Do you have any mentors in the industry?

Because I came from Europe all the people who really like their work are from there. The nail industry wasn’t so big in Canada when I moved 10 years ago, but the girl who inspired me to compete in Contessa is actually an owner of a salon in Medicine Hat, Jenna Bosch, and she gave me my first job. When I started working in her salon, she saw my work and said, “You need to compete,” and she had already competed Contessas at that time and I said, “I don’t know, I just started in nails.” I didn’t have lots of experience in real life, and she said, “You need to compete and you will win.” So I applied and didn’t win, but I kept on trying because I saw how she’s tried a few times. She was the first one who sent me a message after I won, and later on she said, “I felt like a proud Mama.” She really did a lot for me.

I also had an artistic crisis last year and one person who really pushed me to be back in this industry again was Suzie Does Nails because she shares her passion about nails on YouTube and has amazing energy and makes people be inspired, very inspired. She’s amazing. She helped me understand what my goals are and gave me the strength and desire to achieve it

“I have a book about nail art, so I’m working on my second book. I will definitely keep competing and I have some ideas and have thought about the team I will use. I’m inspired even more now.”