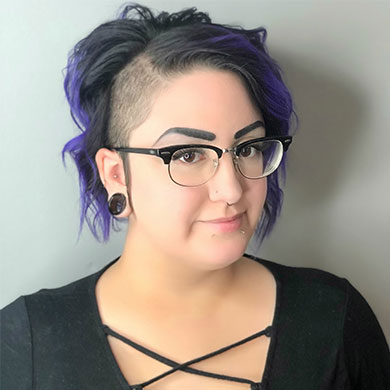 Contessa 2020: Q&A with Student/Apprentice Hairstylist of the Year, Tasha Pinheiro 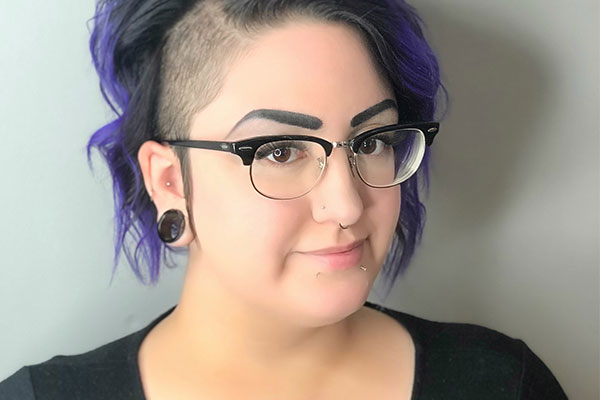 Tell us about your collection and what inspired its concept.

This was the first collection and photo shoot that I’ve ever done. I was in hair school for only six months at that time and was just trying to figure out who I was as a stylist. And I think what I was really looking to achieve was a representation of myself as a stylist, and me finding my voice. I was contemplating back and forth, liking really edgy looks, but also that soft, feminine vintage sort of feel. And I just kind of ended up deciding, ‘Why can’t it be both? If I’m both, why can’t the image be both?’

Can you walk us through the process of creating each of the looks?

I love the cool tones, so I just laid them out. I very carefully tried to make it consistent and even all the way through, so every piece of the hair melted consistently. But I took a skinny section from the portion of her undercut all through her front hairline to the top of the ear and I coloured blocked that all yellow just because I was looking for something to really draw the eye to the role. To actually make the roll, I started with the sock bun and I cut it in half. And she had naturally really long hair so I back combed that entire roll section and wrapped everything around it to build the roll on top of it

She started with a green classic Bob with a fringe, so I used her cut that she already had as sort of an inspiration and a starting point. I knew that I wanted to take the undercut, all the way back to the side to expose the edging, but then I thought, ‘Where can I take that core shape and make it interesting?’ They’re not bangs that you could really pin back. They’re so heavy. So I had a bunch of different variations on this style and that sweeping fringe that sort of overlays on top of the bangs that actually could have been moved in a variety of different places and it gave her the versatility to do something different every single day. For colour, I just wanted to be directly opposite of green.

I definitely wanted something up and something that’s really classic and I thought, ‘Well, braiding is by far one of the oldest styles in existence, so how can we do something different?’ I did want to see the definition of the braids and not have them get lost, so I used a lot of pastes when making the braids.

What was your inspiration behind using tattoos as a focal point?

Tattoos and body art are very much a part of who I am. I consider myself an alternative beauty advocate, which to me means that everything is beautiful in its own way and there is beauty in everything. So I found that the models were always very tattooed and thought that can be an element of the costuming.

Do you have any regrets when looking back at the collection?

I’m quite a perfectionist and I found myself really struggling with that, so I wanted to allow this to be that freeing and to just accept whatever came. At the end when I saw all three images side by side, I was so proud and happy with the final result that I didn’t even care.

As soon as I saw my name, I was euphoric. I was just so excited when I realized the next day, ‘Oh my God, that really happened.’ I’m already on a high and gearing forward. Also, any occasion where people that are passionate about this industry get together fires me right up. I just find it so energizing and inspiring that people will take this much time out of their lives outside of the salon. Everyone in that room cares about what they do so much and about pushing the boundaries and being themselves and just putting themselves out there, it blows my mind.

Do you have any mentors who have helped you throughout your career?

My biggest mentor for sure is my boss, Dee Fortier. She was she was actually my stylist before I even got into hair, I ended up being so inspired. She does the coolest stuff all the time, always doing photo shoots, doing shows, doing everything and competition stuff. I definitely had hair inspirations and inclinations before Dee, but she was like the push of thinking, ‘Hey. this is a real viable career. And I can make something of it.’

I definitely want to do another collection, definitely interested in new hairstylist, I think I probably want to start in my level categories until I feel maybe a little more confident to branch out. As far as 2020 goes, I’m already kind of gearing up for education and making my choices for that. I also always go to Eufora’s annual shows in California, so that’s happening in the spring. The rest of it is kind of up in the air. Definitely want to just keep advancing as far as like furthering my education and teaching.