For Contessa 28 finalist Kelsey Fitzpatrick’s Makeup Artist of the Year collection, it wasn’t only about the face. 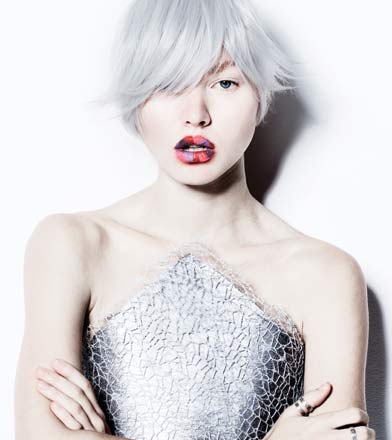 “I was inspired by thick, textural oil painting techniques to create a unique look with one focus feature to complement each hairstyle,” she she says. And while not all makeup artists consider the hairstyles when creating their makeup looks, it’s something Fitzpatrick has grown accustomed to since working with Freddy Sim (on his 2017 Contessa-winning Multicultural Hairstylist of the Year collection) and the team at Moods Hair Salon in Vancouver. “It is so inspiring to work with such an amazing hairstylist,” she says.

MORE THAN MEETS THE EYE

When it came to choosing colours for her collection, Fitzpatrick wanted to use shades “that would match and contrast hair, but that would also be cohesive with each of the different : purples, black, and pops of vivid pink.”

Since the makeup’s application is just as important as the colours and products, Fitzpatrick says she wanted to use a technique that would allow her to easily create unique shapes. “I like to hold my brush loosely with my hand, and let it take the lead,” she says. “I also use a makeup spatula with thick cream products to give that messy oil painting effect,” and adds that transforming makeup to appear like a painting has become part of her signature style.

Fitzpatrick says she’s been active on social media for several years and has utilized its platforms for promoting her work. She now has an impressive following of more than 200,000 on Instagram. “Social media has been one of the most important parts of launching my career. My following grew as I shared my shocking looks, and they have been my biggest supporters,” she says. “It’s also how my agency (NOBASURA), and Kat Von D found me.”

As the only Canadian makeup artist selected by Kat Von D to be part of the Kat Von D Beauty Artistry Collective, her role involves a lot of travelling around the world for product launches, development and education, along with shooting video tutorials for the brand on YouTube. However, Fitzpatrick stills manages to find time to compete in national and international makeup competitions. “Ultimately, I find competitions most important for personal growth, and an integral part of growing internationally as an artist,” she says. “My favourite thing about the Contessas is getting to create looks for the most mind-blowing hair looks I’ve ever seen. It really is a team effort.”