Being a hairdresser for more than 20 years, James Abu-Ulba is always looking forward. And even as an Elite Master Hairstylist finalist, he’s still looking to hair shows and magazines for inspiration. 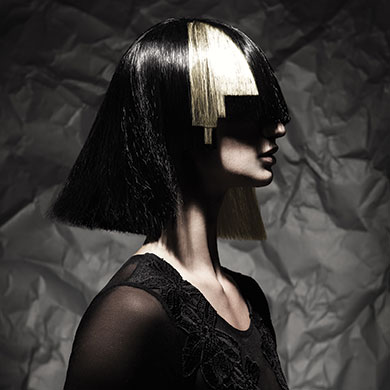 “What I’ve noticed in the industry is that there is a hole in education,” he says. “When I was younger hairstylist, I would wonder ‘How do I take something that I see in Salon magazine and put it on somebody in my hair instead of it just be inspiration?’”

This thought led to the creation of Abu-Ulba’s education company, Method Education, which focuses on elevating the art of hairdressing. “I created a program called Transcend, in which you take what you see from a hair show or magazine and make it translatable for the client,” he explains. “My staff loved it, and I noticed a big change in the quality of work they were doing. It became a lot less typical and a little bit more progressive yet still salon-friendly.”

When it came to his Elite Master Hairstylist collection, Abu-Ulba decided to push his own creative boundaries—creating wigs for the first time. “This collection was called Ideja and it basically just means idea. There were a few mediums I haven’t played with before. I’ve never made a wig or had training to make a wig, but I just wanted to go at it,” he recalls. “Sometimes when you get trained to make something, mistakes are taught to you. Sometimes mistakes are good. I think that’s where all the learning happens.”

Abu-Ulba used a range of hair clippings, braids and even carpet fibres to assemble the wigs, which required an average of eight to 10 hours each to complete. “This was a way for me to come out of what I’ve always done,” he says. “I never want someone to look at my work and say, ‘Oh, that’s James.’ I always want them to wonder whose it is, because that means I’m continuing to do different things.”

“If you look at somebody’s work and can name whose it is, they’ve been doing it for too long and they’re not experimenting as they should,” he adds. “If we continue to do what we’ve always been doing, we’re going to continue creating the same thing.”

When shooting collections, Abu-Ulba says his secret is to not rush the process. “I never shoot it all in one day,” he shares. “I’ll do that because I can see what I like and don’t like and make adjustments to it. I’ll wait until I see those first images then I’ll shoot round two, then see the second round of images then do round three.”

And not every model makes the final cut. “When you’re working on a photoshoot, you need to be doing things creatively and doing things that might not be typical. Not all images turn out great because we test ideas,” he says, “But all of those images are on my idea board because there’s something I like about them and maybe there’s something I need to work on to make them more appealing.”

As a member of the Davines artistic team, Abu-Ulba credits Angelo Seminara (the brand’s former artistic director) as one of his creative mentors. “He taught me to look at hair differently and look for inspiration everywhere.”

For new hairstylists, Abu-Ulba says apprenticeships are the key to learning. “They really need to map out the first five years of their career. The first decision they make once they get out of hair school and where they work typically dictates their entire lifespan in the industry. You have to think beyond the first year. This is an industry that will give you what you give it.”