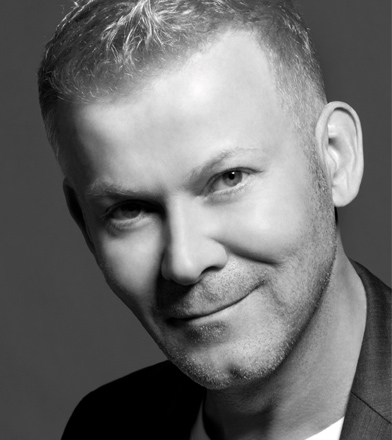 On getting his start

Getting his start about 15 years ago, Carney worked both in-salon and in education as the Principle Trainer for one of London’s most elite hairstyling academies, though everything changed when he met his mentor and one of the key influences in his career, the “brilliant but humble” Trevor Sorbie, who was the Creative Director of Vidal Sassoon at the time they met. “The salon that I worked in at the time was going to a hair show, but I had no idea that evening would literally change my life. I was blown away because there was something so unique about this man who had such an impact on the industry with his technique—I learned not only great skill and mindset, but great freedom as well, which I think is a rare thing to find in somebody. He had such a great sense of balance in his work, which was pretty incredible and very refreshing.”

Though working in a salon is beneficial to the learning process, Carney also encourages stylists to pursue working with a brand if they’re hoping to move into education. “Most companies are always looking for enthusiastic people that love their passion and love their art and looking for a multitude of different levels,” says Carney, who encourages stylists to approach brands, even if their still getting their career started. For him, working alongside a brand has helped him extend his career beyond the salon because, “get to understand so many different things—marketing, selling products and polishing up on your skills.”

On the new role

In his new role as Creative Director North America at Schwarzkopf Professional, Carney is excited to be with the brand after being in contact with them for so long. With his extensive experience with Joico, he’s bringing with him an artistic vision and a wealth of knowledge as he has been for the past 15 years. Carney explained, “I’m a loyal person, but I like to work around people so I grow as well, there comes a time in your life where an opportunity comes along for both parties and it’s just a great fit.”

As for what’s to come, Carney is diving head first into his role with photo shoots and education sessions, spreading his wealth of knowledge to other stylists teamed up with Schwarzkopf Professional, beginning with the Essential Looks campaign for fall/winter. Describing it as an “undone glamour,” for the impending cold-weather season, we can expect lots of texture, both from cuts and adding colour to the hair, getting shiny, glossier looks that appear very luxurious, as well as lots of movement from Schwarzkopf Professional.