Being multi-award-winning stylists, salon owners and brand educators, David and Marilyn Vendittelli’s journey in the hair industry began more than 20 years ago. Now, as the parents of a pre-teen and teenager, this husband-and-wife duo isn’t letting anything slow them down. 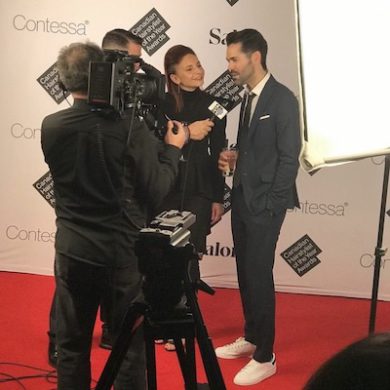 David first met Marilyn at a hair show, where she was working as a stylist. At the time, David was working as a model while also having a full-time bank job. It was Marilyn’s drive and passion for beauty that motivated him to make a career change that would allow him to express his creativity.

While the couple was skeptical at first about the idea of working together, it’s brought them even closer and they’ve been working together ever since. “We’ve made it as long as we have because we respect each other,” says Marilyn. “You need to know where you excel and stay on that path. Respect, communication and knowing when to admit you’re wrong have been the key ingredients to our success.” 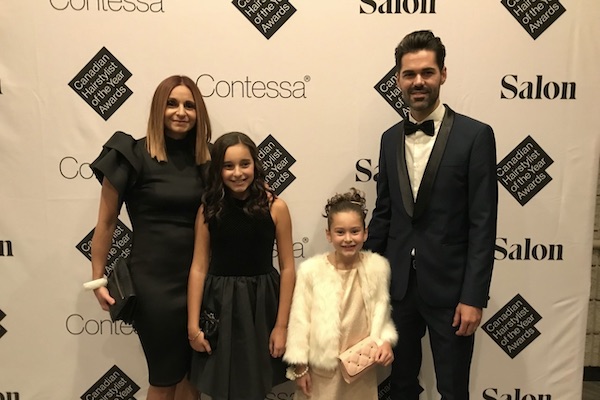 Welcome to the Family

With European roots, the Vendittellis, who opened Industry Hair & Esthetics in 2016, have a mission of sharing their family values, while teaching realistic business practices and making both their salon team and clients feel like part of their family. “We’re very family-oriented and we do everything as a team,” says Marilyn. “You aren’t just coming to get your hair done; you’re a part of our culture and family.”

From running a business to growing a family to competing in the Contessa Awards, the Vendittellis do a lot together. “I can honestly say I cannot do a collection without Marilyn,” says David. “Being able to work together and seeing our work published is so rewarding and emotional because we know how much work goes into it.”

With the goal of increasing their education offerings while building up their team, the couple has a shared vision when it comes to teaching. “Our number one statement from day one of teaching is that we teach reality in the salon,” says Marilyn. “We teach what’s kept us busy and successful. We want to be able to share with other stylists and get our younger staff involved. We want our team to be here for a long time, and our goal is to give them a good life that we weren’t necessarily shown at the beginning of our careers.”

It’s America meets Canada for Julio Rodriguez and Derrick Rutherford—salon owners and Matrix educators from Guelph, Ont. The couple opens up about their passion for the beauty industry and what it’s like to work with your partner on a daily basis.

2022 is a big year for the couple. In addition to their plans to continue competing alongside each other, they’re celebrating milestones including their 15th wedding anniversary and the salon’s 35th year in business! 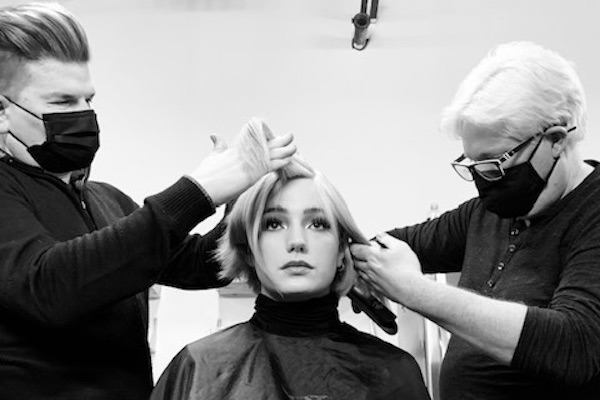 Before they met, Rutherford was working as a model for hair brands. He quickly became interested in the industry after seeing what went on backstage at hair shows, and decided to go to hair school. As for Rodriguez, he was working as a makeup artist and colourist in New Jersey, where the couple met at a hair show. Once he moved to Canada, they decided to get into business together.

Rodriguez says adjusting to Canadian culture was difficult for him—both in and out of the salon. “Being American and Puerto Rican, coming to Canada and working with someone who is Scottish and English was a learning curve for us,” he says. “It was culturally different for me because where I come from in New Jersey, I felt like a majority, but when I moved here, I felt like a minority. We communicated a lot and now that I’ve been in the Canadian industry for so long, I couldn’t imagine working in an American salon.”

In addition to having different backgrounds, they also have very different personalities. According to the couple, Rodriguez tends to be a bit harsher and Rutherford is actually the softer one. “I tend to have less patience with people, whereas Derrick wants to give someone more chances,” says Rodriguez. “He’s taught me to be stronger, both personally and professionally. Sometimes you have to stand up for yourself, your ideas and what you want.”

“Julio has made me softer and kinder,” adds Rutherford. “He’s taught me to be more relaxed and a lot more empathetic.” 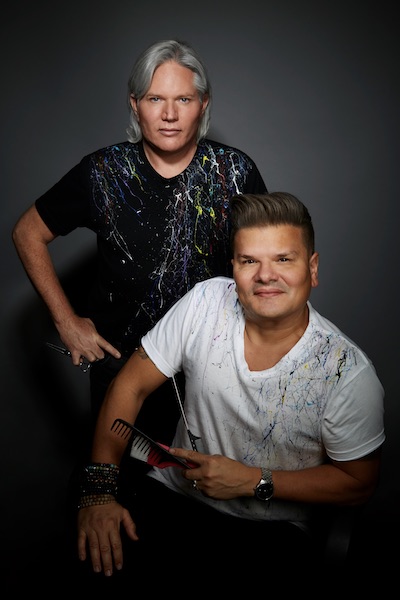 The couple has now been married for 15 years and has established a routine that allows them to get as much done in a day as possible. “We go for a walk at 6 a.m. every morning and debrief about the salon before we go our separate ways for work,” says Rutherford. “We get up early so we have enough time to do everything we need to for work while still being able to have a healthy physical and social life.”

The couple has also found it important to set boundaries for themselves and their business. “When we come home, the last thing we want to do is talk about work, so we leave it at the salon,” says Rodriguez. “We need to take the time to decompress and spend time with each other.”

The couple also designed their salon so they can both work on different floors throughout the day and avoid working directly beside each other. “I work upstairs with all of the colour, and Derrick works downstairs and does the cutting and styling,” says Rodriguez. “That separation is very helpful because it allows us to concentrate on those specific tasks, so we aren’t getting in each other’s way.”

The individual roles and responsibilities the couple has outlined for each other are also important when working on collections together for competitions, including the Contessas.

“Julio generally comes up with the concepts of collections because he really enjoys doing that,” says Rutherford. “He also does the clothing and the moods of the collections, along with the colour of the hair, then I will cut and style the hair.”

Over the course of their relationship, Rodriguez says he believes that competitions have made them even closer. “We’ve created a signature look that works for the both of us. Our strengths and weaknesses work together and we listen to each other,” he says. “We don’t take criticism from each other personally anymore. We just want what’s best for each other and the salon.”