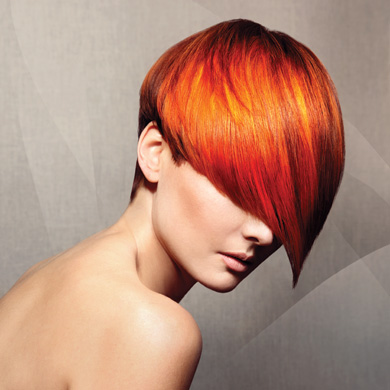 From Dreams to Reality: How One Contessa-Winner Re-Discovered Her Passion

This award-winning hairstylist’s story has not only touched us but truly exemplifies why we love doing what we do.

In 2008, I was a very busy, successful salon owner, with a large salon in Langley, B.C. I had been working in hair for 26 years.

The only catch was, I had lost all passion for my chosen profession. All the things that first made me choose hairdressing had been somehow set aside for a life of repetition. The creativity I dreamed of. The dreams of being a platform artist, educator and travelling the world. I also lost the love of creating hair just for the sake of the art itself. All those things had been placed in the back of my mind. I believed the saying, “Not everything is meant for you.”

It’s not for lack of work that I wasn’t where I thought I would be—it was for lack of self-confidence. I had resigned to, excitedly, waiting for my monthly Salon magazine to arrive and staring at every page dreaming of an alternate world where creating those photos was a reality.

Then, in 2008, for the first time, I wanted to try something that scared me. I planned my first shoot for Master Colourist for Contessa (it was the first year of that category). I made semi- finals for Contessa in both Master Colourist and the then category, Makeover Colourist. The day I received the call I was a finalist I cried. It was unimaginable to me that it could even be possible.

When I attended Contessa that year, for the first time, just being there felt like the achievement of a lifetime. I was in awe. Standing near me were all the hair idols I had admired from afar for years.

When my first category was up and a name was called, I began to clap. I was just so happy to be there and to be able to clap for someone! What I didn’t hear was that they’d called my name. My photographer, Greg Swales, was sitting on one side of me and my grown daughter was sitting on the other. She hit my leg and said, “Mom, it’s you.” I couldn’t stand up. Greg had to take my hand and walk me on stage. I have no idea what I said, I just know I ‘ugly cried’ complete and utter joy.

That night I also won my other category. I remember calling my mother, who was also a hairdresser, from the bathroom that night crying, telling her “Mom, I won.”

The following year I had a repeat—I won the same two categories for Contessa. 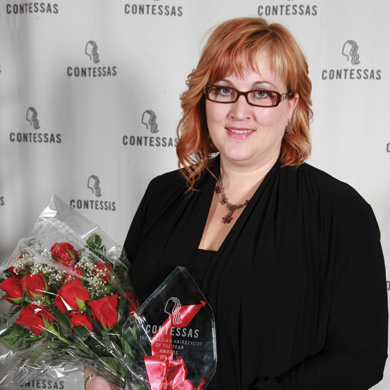 After that, I became an educator for Goldwell, the colour line and company I’d loved for so long. Nine years and eight Contessas later, I live a life I could only have dreamed of. I travel the world. I mentor and teach. I do photo shoots and create. The passion I lost not only came back—it came back 100 fold.

What the Contessa Awards gave me is truly more than I can ever put into words. It’s more than my career. I found a belief in myself that changed every aspect of my life. I learned that anything is possible if you’re willing to work hard and take chances.

Thank you, Salon. Wishing you many more years of beautiful hair and inspiration to all the young hairstylists out there.