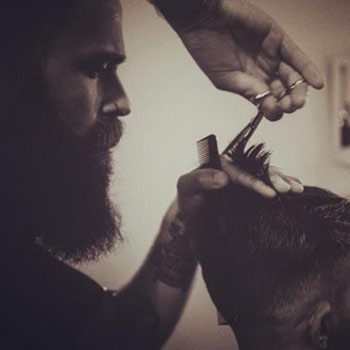 Add these key expressions to your men’s hairstyling vocabulary this season—“the barbershop experience” and the “lumbersexual”—and be on track with the hottest spring 2015 look for men. According to the specialists we spoke with, this stylistic evolution in men’s hair comes as a clean break from the matte finishes and scissors-over-comb cutting techniques we’ve seen so much of in the past five years. Add a dash of hipsters-mad-for-vintage and you’ll create a craving for the perfect blade cut reminiscent of the 50s and 60s rockabillies, while boasting loads of über-masculine facial hair.

Who is the Lumbersexual?

Following in the footsteps of the metrosexual and the übersexual, the lumbersexual is the new male icon of the moment. Rugged and virile, he sports a manly beard, is beefed up, wears leather boots and a checkered shirt (yup, all the stereotypes are there…) and has climbed his way through the most influential fashion and hairstyling blogs.

Back to the roots

“Right now, there’s a steep increase in demand for classes specifically addressing barbering techniques,” says Martin April, owner of the barbershop-inspired Salon Léopold in Montreal, and educator for MensDept. and Reuzel, a brand created by Schorem, the titans of the old-school barbershop trend that tend court in the Netherlands. “Essentially, stylists are eager for a new skill-set that had been lost because practically no one was cutting hair with clippers and blades anymore. And you just can’t do a proper shadow fade [where sideburns and nape gradually fill in] without these haircutting tools,” points out April.

The barbershop trend took off three years ago in edgy, urban salons in Rotterdam, the Netherlands, and New York but is now gaining momentum and trickling down to all major cities and attracting many different types of clients as well. Witness this year’s Contessa Fan Favourite award, which was scooped up by Matty Conrad of Victoria, B.C., for his men’s collection with a barbershop vibe.

However, April says it’s more than a trend but rather, “a way of life”. Think of all the paraphernalia, including tattoos and piercings, that originally supported this change in aesthetics and further extended to salon decor, including dark woods and man-cave appeal. 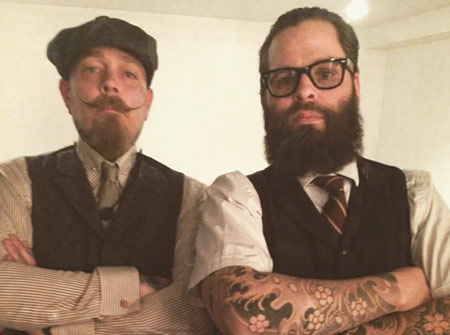 “Anyone who calls himself a barber needs to have at least one excellent clipper, if not more.” says Pete Goupil, a barber at Salon Espace C in Brossard, Que., and international educator at All Star for American Crew. “As well, seven-inch shears and some good combs are essential. Personally, I have nothing against cutting guides for clippers, but if you’re talking about the traditional art of the clipper cut, I only use it without one.”

Strong-hold gels and shine pomades are also essential in creating these new hairstyles, which have much more detailing. Wide, clearly defined parting is also an important aspect of the barbering trend. We’ve essentially moved away from matte, feathered looks achieved with clays and dry pastes to slicked finishes that have holding power and leave a superb, gleaming finish.

“But the new styling products are what really have helped popularize the barbershop style and ultimately made it accessible,” confirms David Tremblay, marketing and communications program manager for Cosbec, a Quebec distributor that has Label.M, MensDept. and Reuzel in its portfolio. These brands have made an indelible imprint in creating and promoting this style. 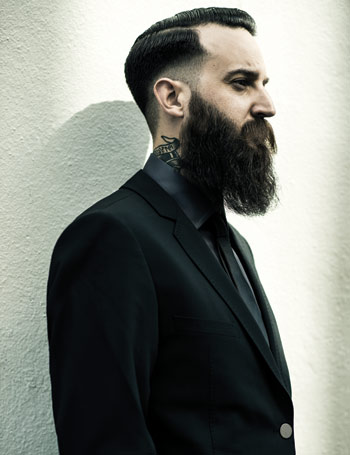 “Even if [as stylists and barbers] we each have our own style, I swear by the American Crew barbering techniques. I think they’re the easiest and more efficient ones. But what really helps me achieve the best look for each client is to visualize the steps I will take before I start cutting the hair,”says Goupil. It’s a sensible approach since, the art of barbering is all about details and enhancing your client’s best features. “A great barber knows how to create the perfect shape, and finishing is also extremely important in the barbershop trend. I recommend avoiding round shapes because they tend to look feminine,” continues Goupil.

Over the years, some say that male clients were not being well served by big, trendy, unisex salons, and that’s the number one reason why the barbershop is in style again. For others, it’s just the trends pendulum swinging back full throttle to the sources of the traditional men’s-only salon. In fact, at Schorem, women aren’t allowed and the space has all the manly attributes of the classic man cave.

The Schorem guys —which, by the way, means “scum” in English—who are the high apostles of the barbershop style, toured Canada in March. Check out our Instagram @salonmagazine for behind the scenes looks.