It’s often said that “to be a good leader, you sometimes need to go down the untravelled path.” And that’s exactly what David Raccuglia has done. 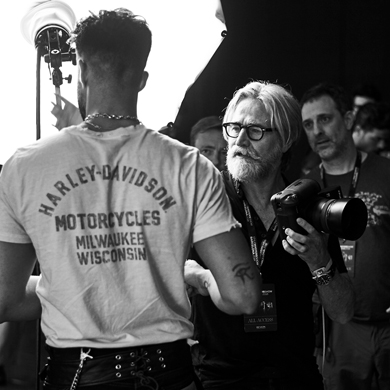 Since 1994—the year American Crew was founded—Raccuglia has been a trailblazing leader in the professional men’s hairstyling and grooming category. And nearly 25 years later, he continues to be moving full steam ahead.

“It was through education—one salon at a time, one city at a time, one country at a time—teaching people how to cut men’s hair and how to be inspired to want to do men’s hair. And there was no social media back then,” he says. “We have this following; not based on Instagram but based on users. That’s what we’re proud of. It’s not about a product—we inspired a category.”

With a new campaign and partnership with Harley-Davidson, the 2019 All-Star Challenge, and a coffee-table book in the works, American Crew is “all revved up” as they continue to grow (and inspire #ManCrushMonday posts!) around the world.

Style for the Road

This year has already been a roaring success for the brand. With its 2018-2019 partnership with Harley-Davidson, American Crew has unveiled a new look that is more modern and youthful in its Style for the Road campaign.

“Harley is such an iconic American brand. They are in a similar transition as American Crew, where they are looking for younger clients. Harley guys have a certain look, and we’re sort of taking that look and bringing it into today, with hair and beard cutting,” he says. “Harley is a very masculine brand, so it’s nice for our groomers to see a different side of American Crew.”

Raccuglia photographed the campaign in Marfa, Texas with bikers and models, including Levi Stocke (who rode in all the way from Los Angeles!) and Preston Trites.

“Marfa is in the west-Texan desert and it’s an amazing place to ride motorcycles,” says Raccuglia. “We wanted to show a real ride—from the River Road along the Mexican border. And if you think about it, you have to be prepared to groom while on the road. Harley riders are very stylish; they are geared up to go on a motorcycle trip and they look amazing. So, we wanted to give them all of the right hair and grooming products.”

Shot at a local campground, the Style for the Road campaign features the men outside, applying hair and grooming products using outdoor shower areas and sinks.

While American Crew has collaborated with other iconic brands before, Raccuglia says working with Harley-Davidson was unlike anything they’ve done before.

“When we started putting the two looks of our brands together, merging some of their past creative work with our creative work, we realized that we have a certain blend. Barbers and bikers fit very well. A lot of times there are motorcycles outside of a barbershop,” he says. “This is a very casual campaign; there’s no suit and tie. But both of these guys [in the campaign] could be weekend warriors, which is what a lot of Harley guys are: They’re doctors, lawyers, brokers and real estate guys. But on the weekend, the guys gear up and hit the road.”

Road Ahead: A Milestone!

With American Crew’s 25th anniversary next year, the brand is already working on a new collection featuring Harley-Davidson, which will be revealed at the 2019 All-Star Challenge in New York. And early next year, American Crew is releasing a coffee-table book with its history and photos.

“In 1994, there were very few people going into the craft of barbering. Through our collections, imagery and passion for men, we taught hairstylists that had no experience in cutting men’s hair, how to adapt our techniques and become good men’s groomers,” says Raccuglia. “That has been the biggest part of American Crew’s success.”