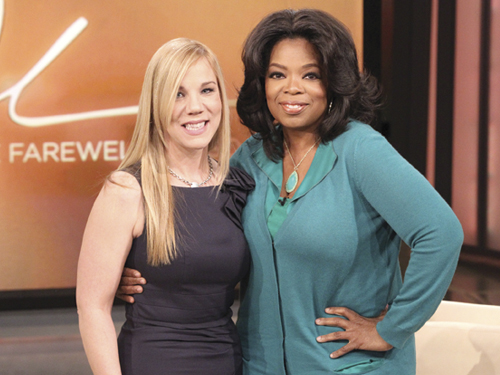 How a Calgary stylist ended up on Oprah

After hitting rock bottom, a Calgary stylist scores a total life transformation through roller-skating, hair and a little flair

Imagine having your life’s dirty laundry revealed on television. Then, to make matters worse, a big secret is exposed leaving you absolutely mortified in front of 25 million viewers.

For Calgary’s Trina Marr, saying 2004 wasn’t her best year is a bit of an understatement. Seven years ago, the salon owner and mother of two young daughters, was in a troubled marriage and weighed 200 pounds. Then, the 32-year-old, five-foot-five-inch stylist joined the cast of Life Network’s Taking It Off; a nation-wide program with camera crews catching every moment of Marr’s life as she tried to lose the weight. Canadians weren’t the only ones glued to the reality show. A producer working for the queen of daytime TV…

was captivated by Marr’s heated debates with husband, Trevor. In March 2005, the couple appeared on The Oprah Winfrey Show. The topic? “You’re Not The Person I Married.” What happened next was like a car crash. Oprah surprised Marr with behind-the-scenes footage from the reality show of Trevor flirting with women at the gym.

“The humiliation was painful. It was more than I could bear,” says Marr. “I realized Oprah’s production team had all the episodes of Taking It Off, but I had only seen the first three.”

After a follow-up appearance two months later, Marr told Oprah and millions of viewers, “I’m going to lose 180 pounds of dead weight by divorcing Trevor the minute I get off this stage.”

She followed through, but Marr’s world spiralled down for the next two years. The only thing that was up was her weight—250 pounds. Then, she had to close her salon because the building was going to be demolished. “It was an easy way out. I went from salon owner to stylist. I felt I was that girl on Oprah; failing my daughters, myself and living like a hermit.”

Finally the self-pity party—as Marr calls it—was ended when a client introduced her to a women’s roller derby league. She found herself surrounded by women who didn’t judge her weight. “Being on Calgary’s Cutthroat Cutters was a world where I could feel good about myself because my derby friends had positive attitudes toward their bodies,” she says. Her team never asked her to lose weight; on the contrary, they were thrilled she’d be a better hitter. It was during a team victory celebration that the new Trina Marr, who was high on life but still more than 200 pounds, met Mario Mayhofer, a guy who loved her just the way she was. Even so, she continued to take off the weight, dropping a total of 95 pounds.

Marr’s advice to hair industry types waging war on weight is to get active. “Pounds dropped because I was skating three times a week,” she says. Marr acknowledges that it can be a struggle as a stylist when you’re booked solid all day and sneak back to devour anything quickly before the next client arrives. “I stock my drawers at work with healthy snacks like fruit and whole-grain bars.” She also says it helps if your salon owner installs a functional kitchen so stylists can prepare meals rather than order takeout.

Today, the CaVaBien Hair Studio stylist is also the Canadian manager for Hair Flairs (hairflairs.com), makers of hair extension tinsels and feathers. The hair bling has become a hot hair accessory for red carpet celebs, as well as everyday women.

Last January, the trim 155-pound Marr had a chance to show those 25 million viewers all the ways her life has turned around in six years. She appeared on Oprah again, but this time, her new husband, Mayhofer, accompanied her to the show after their recent wedding in Austria. The icing on the cake was what happened post-show. The smart businesswoman wore Hair Flairs during her interview, and Oprah asked Marr questions about the sparkle in her hair. When the show aired, Marr’s phone rang off the hook: “That day, Hair Flairs had a 2,000 per cent increase.”