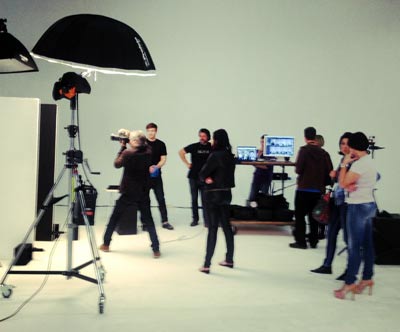 How To Create A Stunning Hair Image Under Pressure

As Canada’s finalist in American Crew’s men’s All Star Challenge competition, 25 year-old Jacob Rozenberg, of Moods Salon in Vancouver, did his best to prepare for his final photoshoot. “I thought it was going to be an incredible experience. I knew that they were going to pull out all the stops.”

The only thing that he knew going into the shoot (which took place in Lisbon, Portugal) was that his photographer would be American Crew founder David Raccuglia, that his model would be chosen at random, and one photo would determine which of the 14 international finalists (many of whom were seasoned barbers) would take home this year’s title. (No pressure, right?)

It wasn’t until he stepped on set, that he discovered that he had 45 minutes to cut and style his model, and only 30 minutes to shoot his final image.

Below, he share his experience, which he says “met and exceeded” his expectations, and his newly-learned photoshoot tips for capturing the best hairstyle you can under extreme time constraints—and stress.

Rozenberg researched past American Crew imagery so that he could work with the company’s aesthetic when imagining the kind of photo he wanted to produce. He looked to men’s magazines such as Sharp, Details and GQ for images that emulated the final look he wanted to achieve. He also decided to go to Europe a week early, visiting Rome, London and Paris to get inspired by men’s styling internationally.

Tear sheets are a necessity in getting your point across quickly to your team. “Explaining your idea to the photographer, makeup artist and stylist is easier to do through a photo than words.” He brought his tear sheets in to help decide on lighting, model poses, and the overall styling he wanted for the shoot. This can be extremely helpful at an international photo shoot where everyone may not speak the same language. 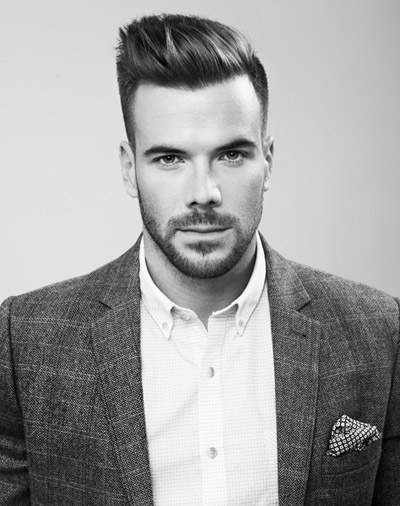 3. Practice as much as you can.

Rozenberg has always had more female client than male ones, but after being inspired by a men’s cutting course he took with Chad Taylor, he decided to challenge himself by entering the competition. “It revolutionized the way I was cutting men’s hair.” When he became a finalist, he started practicing his ability to pick up the pace of completing cuts by scheduling extra male clients at night with different styles while timing himself so he would feel more comfortable under the competition’s tight time constraints.

4. Cater to the model, not your vision.

“From past experiences, I’ve learned that you can’t pick your hairstyle before you pick your model.” Luckily, Rozenberg was randomly selected to have first choice of models. He looked at each model’s face shape, hair texture, growth patterns, cowlicks, etc. before selecting. He then took a profile and front shot to get a better idea of how his model’s bone structure would come across on camera. Then, when it came to the final hairstyle, he made the decision as he would with any of his clients. “I treated it like I was meeting a client for the first time, but I gave him what I thought was his ultimate look.” 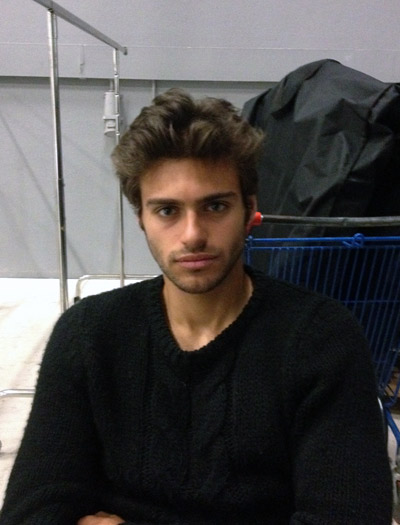 5. Accept nerves as part of the experience.

With the eyes of the judges on him while he worked, Rozenberg admits he got very nervous on set. “Being on the world stage, representing Canada, you want to do well. I tried to focus and say to myself ‘It’s okay; this is just like every day in the salon’. I was shaking.” This made it difficult for him to create the details needed to pull off a precise men’s cut, but he decided to soldier on doing what he felt most comfortable with to keep himself calm.

6. Stick with what you know.

Rozenberg felt even more anxious when he tried to use the clippers provided for him by the competition. “They were European trimmers and they were slower. I wasn’t used to them.” Feeling unsure of how this would affect his technique, he decided to do a scissor over comb taper instead. Although this took more time than a clipper would have, Rozenberg wasn’t feeling comfortable enough to do his best work. “Don’t bother with what you’re not sure of,” he advises.

7. Communicate clearly with your team in advance.

Rozenberg made sure he explained to his model that he wanted him to move very slowly in front of the camera and the poses he thought would best show off the cut so that he could properly capture his vision. He also made sure that he spoke with Raccuglia about his vision before the shoot started. “Make sure you’re comfortable with the photographer.” He said that Raccuglia was very warm and easy to work with, which made running onto set to fix an out of place hair much easier—especially since Rozenberg needed to be completely in charge of the outcome of the shot. (As a judge for the competition, Raccuglia technically couldn’t offer much direction.) 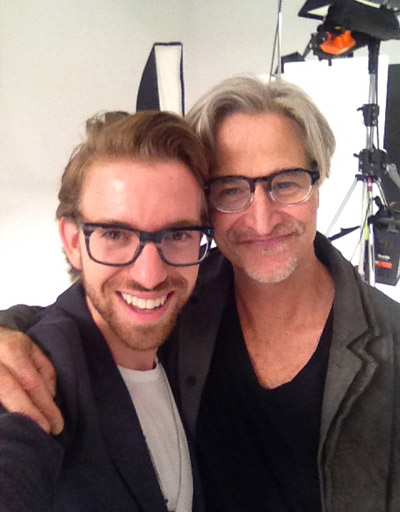 8. Stay focused on the goal of the shoot.

“You want to remember what you’re shooting for. You shoot differently for a cover than you would for a contest or an editorial.” Rozenberg says in a competition, judges want to see details of your work, so it’s important to pick styles and poses that show these off. Knowing the competition was all about men’s cutting, Rozenberg tried poses that highlighted the sides and nape of the neck. However, he suggests that some principles, like engaging eye contact, are always important.

Looking back upon the shoot, Rozenberg feels he may have over-styled his shot. Having to choose the wardrobe himself was difficult, and Rozenberg wonders if a more casual outfit would have served him better in the competition. “I had to do what felt right to me, and [what] I thought the model could pull off. I really think he looks amazing –but does every man relate?” wonders Rozenberg, remembering that his image needed to appeal to the chic, masculine, everyday styling associated with American Crew. At the end of the day, he says you may feel like “you’re double guessing everything you’ve done,” but you should always “go with what feels good” on set. 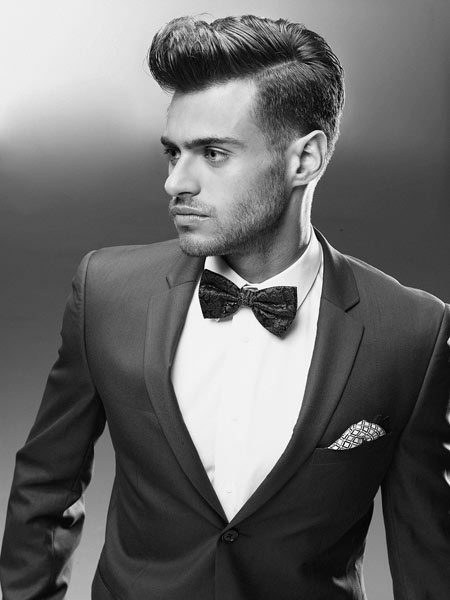 Rozenberg had a wonderful experience working with Raccuglia and the American Crew team. Despite the magnitude of the event, Rozenberg says the experience was an intimate one. “All the other competitors were great to meet, its something you don’t get to do every day. That was very special.” He will take the lessons he’s learned onto his next big challenge. 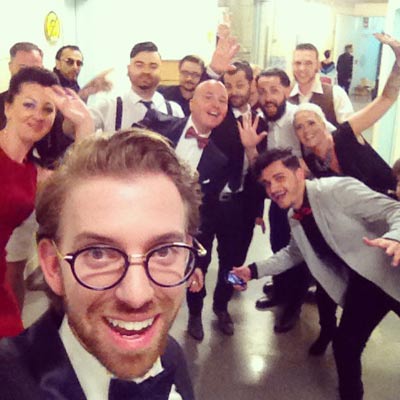 Selfie with the American Crew finalists!