In this series, we put a spotlight on influencers who are making waves in the industry. 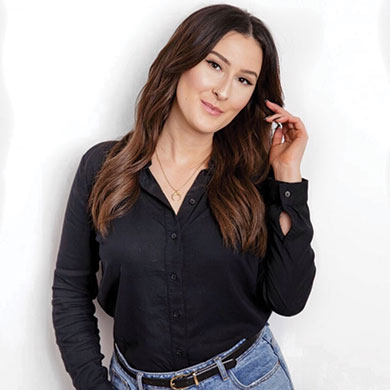 Tell us about yourself.

I’ve been a hairstylist for approximately 10 years. I’ve been a salon owner for two and a half years. When I got into the industry, I found that I was very drawn towards doing colour. I thought it was one of my strengths, so I decided to play on that. Back in the day, I started trying out new techniques and it really took off for me. I was able to build a very solid and successful clientele from that.

My salon is Amber Joy & Co. We’re located in Winnipeg. We specialize in doing balayage, foilayage, colour and hair extensions. There are four chairs with a team of five—two other hairstylists, a manager, an apprentice and me. We’re a small team but we’re super passionate about what we do. It’s nice to do what you love every day.

I’ve been an independent educator for approximately five years. Education-wise, I do host classes at my salon, but I also host private classes for other salons; I’ve hosted classes in Toronto, Saskatchewan and Winnipeg that are open to the public. I’ve also had the opportunity to travel for education, too. Education is something I’ve strived to do; I think knowledge is power and I just love educating and seeing my students grow.

I do have brands that will sometimes sponsor me. Class with Summit Salon Services coming up. Redken is sponsoring me for that class, so I will be using their product.

What forms of education were most helpful to you?

When I started learning how to do colour, there wasn’t a lot of education available. A lot of trial and error. I watched a lot of Guy Tang videos. He was really the only person putting out education at that time—six or seven years ago—on doing balayage and things like that. I utilized YouTube, got on Instagram, kept watching stuff, trying stuff and continuing to grow from there.

Right now, I film mini videos for Instagram. I don’t have an actual video platform for education yet; that’s something I would like to launch on my website in the future.

What inspires you as a colourist?

Every person’s hair is a different canvas. I love the opportunity to create something customized for them. I think that’s what keeps me motivated and creative as a colourist—no two heads are the same.

I’m really enjoying that ashy grey tones are moving out, and I’m loving that those warmer tones are coming back in. I’m playing a lot with blending; bronze, creamy vanilla blondes—kind of more natural tones and things that are shiny and reflective.

Any specific techniques or looks that you’re known for?

When it comes to photo shoots, I don’t do anything too outside of the box. If I’m doing photos for my page, I like to do glam waves or pretty ponytails.

How have you been able to build your social following?

I was really lucky that I got into Instagram early—I think I’ve had my page going for about six years. I had a steady build with mine; I would just post some really good content, networked a lot and spent a lot of time creating relationships with other hairstylists that would also bring people to my page. I think content is the hugest thing though people want to see good content and stay on your page for a reason. Posting really good photos and education on my page has really helped me grow.

I think it’s a little different now with the algorithm but focusing on content and networking is huge.

What has social media done for your career?

Social media has played a huge part in the growth in my career. I had a steady and solid clientele before I started my Instagram page, but after I started my page my clientele tripled, and I had to close my books in 2015 and I still have not re-opened them. The demand it’s created has been amazing, and it’s also opened up so many opportunities. It’s connected me with magazines, brands, other hairstylists that I’ve been able to do education with as well. I’ve made so many friends in the industry. It’s opened up so many doors.

Where do you think you would be without social media?

I think it would have just moved a little bit slower. I feel that with how driven I am, I would still end up where I am today, but I don’t think it would have happened as quickly. I think everything was more available to me [because of social media], so I could move a lot faster.

What do you look for when partnering with brands?

I want to make sure it’s something that I actually like. It’s really important to me that whatever I’m advertising, I’m actually using. If a brand wants to send me something, that’s great; I’ll try it out. But I’m pretty honest—if I don’t like it, I don’t continue to use it. I want to make sure the brands I’m working with are genuine, and their products are real.