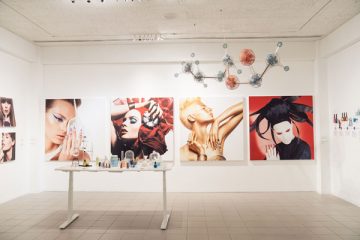 CND has added a whole new meaning to nail art!

On October 9 and 10 we travelled to San Diego, Calif. for the two-day celebration of CND’s 40th anniversary.

The event began to the luxurious Rancho Valencia resort in Rancho Santa Fe, Calif., where the event officially kicked off with a dinner hosted by CND brand ambassador Marian Newman.

As the author of Nailed It, a book celebrating her 20-plus years as an editorial nail artist for fashion week, celebrities, and photo shoots, Newman opened up about how much working with the brand has meant to her. “I’ve known CND for [more than] 30 years,” she says. “I wouldn’t be me if it wasn’t for CND. I’ve been very lucky that this is the third year that I’ve been a brand ambassador and been doing lots of work with Jan Arnold and [fashion] shows.”

Fashion week has been a huge part of CND’s 40th milestone. For the past 25 years, the brand has collaborated with more than 300 designers from around the world. “[Fashion week] was game-changing because it elevated nails to a different stature and opened up the potential for colour and creativity,” says Jan Arnold, co-founder of CND. “It doesn’t matter your age, size, who you are, where you live, everyone can make nails their fashion statement.”

CND’s 40th anniversary celebration took place in Oceanside, California (the brand’s birthplace) for the Tiny Canvases: The Art of Nails exhibit at the Oceanside Museum of Art. Divided into six key themes, the exhibit takes visitors through the CND journey; from meeting the nail artists behind many of the brand’s iconic looks, to a retrospective on the history of nails dating back to 3,200 BCE, to the history of CND’s innovations throughout the years, to a peek inside the CND Design Lab. 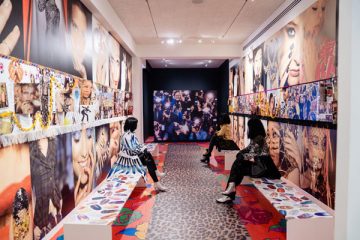 But the pièce de résistance has to be the more than 10,000 nail plates (aka. tiny canvases) that are on display from CND’s 25-plus years at fashion week. With curated storyboards for Avant-Garde, Vintage, Pop Art, Punk, Femme Fatale, Villains, Whimsical and Viva Glam, the exhibit showcases the impressive stamp CND has made on the fashion and beauty industry. Visitors also get the opportunity to “walk the runway” as they learn more about the brand’s work for fashion week and editorial photo shoots.

“It’s been like memory lane. There are nails from every designer we’ve worked with, curated into these very defined storyboards,” says Arnold. “It’s been amazing to see the reaction of the general public. For me, that’s the path of our 40-year journey. Technology, breakthrough science, the relationship with the extraordinary artists, the magic we’ve been able to extract from fashion and runway. We’re science geeks on one side and fashion forward on the other side. Tiny Canvases brings that together.”

“Tiny Canvases: The Art of Nails” runs until February 9, 2020 at the Oceanside Museum of Art in California.