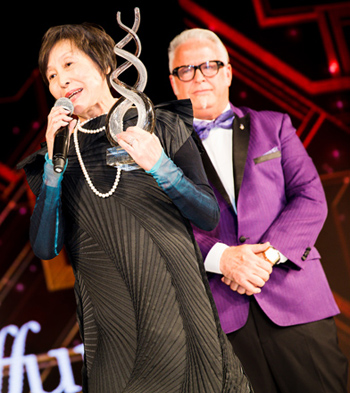 Since opening her salon in 1972, Suki Takagi has become internationally recognized for her creative vision. Last month, Takagi was recognized for her global success awarded the Sans Bias Lifetime Achievement Award at the Intercoiffure Fall Atelier.

“I was really surprised because I had no idea it would happen. I am very honoured and grateful to the Intercoiffure organization,” she says. “For me, hairstyling has always been about passion and tenacity and believing in our industry.”

Presented by Frank Gambuzza, president of Intercoiffure, the Sans Bias Award is awarded to individuals who have been exceptionally successful in the professional beauty industry. Takagi, who was born in Japan, studied hairstyling in the U.K. and worked in Beverly Hills before opening Suki’s Salon in British Columbia in the ’70s.

And more than 40 years later, Takagi continues to have the same passion for hairstyling. “It’s a wonderful industry we chose,” she says. “It’s a great honour whenever a client chooses your salon and they choose you. They are sitting in your chair. For us, we’re committed and invested in our industry. I really do emphasize that it’s not just about cutting or colouring hair. We have to educate ourselves to better ourselves.”

Keeping the business in the family—her son, Ken, is at the helm as president of Suki’s—Takagi continues to build her team from the ground up. “I see younger people coming into the industry and they have full ambition,” she explains. “For us, we’re committed to making the skill level the top one per cent in the world, and that begins with education.”

Now, Suki’s Salon, Spa and Academy (a Contessa 2017 finalist for Canadian Salon Team of the Year) has more than 150 staff, along with students from around the world attending the prestigious academy. With a global perspective on the industry, Takagi says she is proud of the Canadian hairstyling community.

“In Canada, we, as hairstylists, are quite equal with the rest of the world. I think that’s why Canada does so well at NAHA,” says Takagi. “We’re very lucky that we have such a beautiful range of cultures in Canada. You see that in our staff and our clients. It’s something to celebrate.”