Take a Tour of Jaja Spa in Toronto

Located in Toronto’s burgeoning Long Branch neighbourhood, Jaja Spa is in a league of its own. 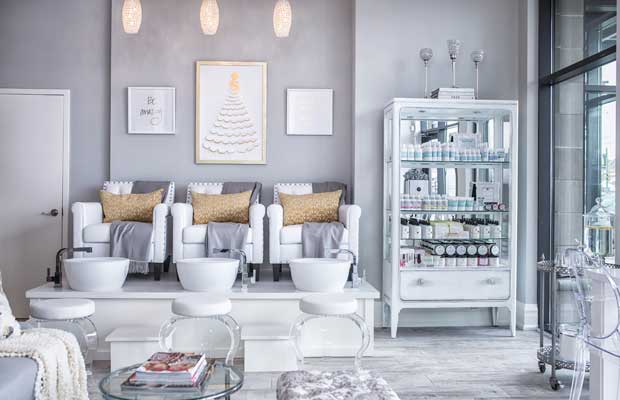 When you step inside Jaja Spa’s chic, quaint space, it’s clear that the spa was designed with an emphasis on luxury with opulent touches like the ornate chandelier, made of more than 500 crystals, greeting you as you walk through the door.

“It was actually the first purchase we made as a business,” says Jacqueline Sousa, co-owner of Jaja Spa. “It captured the vibe we were going for. It’s hard to miss and is often the first thing people comment on when they walk in.”

Sousa and her best friend (since first grade) Kayla Hetherington opened the spa in 2015. As we spoke on the spa’s two-year anniversary, the business continues to be a shared enterprise led by their passion for the industry. While friends and business don’t always mix, Hetherington says their friendship has thrived with the spa.

“A lot of people warned us about going into business with a friend, but we found that being at work together has been comforting,” she says. “We’ve known each other for so long that we’re practically family, so it keeps communication really open.”

Sousa, whose niece used to call her “Jaja” (hence the spa’s name), says she has always enjoyed interior design and designed the spa with Hetherington.

“We wanted the spa’s design to encompass an elegant, chic, cozy space that feels like home,” she explains. “We knew we wanted to go with a white space with greys and just change up the colour scheme each season. We got a lot of inspiration from Pinterest and shopped for modern, minimalistic pieces. Certain fixtures like our manicure and pedicure stations were custom-made, so they were created exactly as we envisioned.”

Like most millennials, Sousa and Hetherington are social media savvy and look to it for the latest nail and beauty trends.

What’s their advice for aspiring young entrepreneurs? “When you have an idea, run with it,” says Hetherington. “Sometimes when an idea sits with you for too long, nothing gets done. When we decided we wanted to open the spa, that was the plan.”

Sousa echoes her enthusiasm. “We were young and ran with the idea,” she says. “You just have to take that young energy and go with it!”