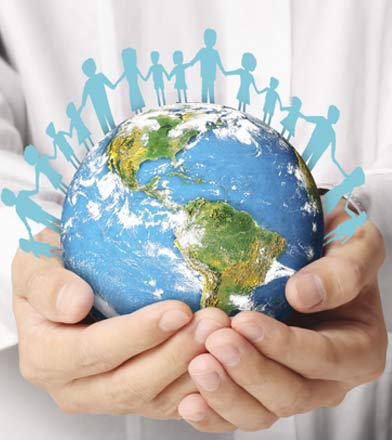 Unless you’ve already been hired by a salon or you’re in a corporate position where the company helps streamline your move abroad, be prepared and stay organized on the paperwork that needs to be done before you can move ahead.

“Have all the documents in hand before applying for your work visa,” says Mathieu Latour, a young freelance stylist originally from Montreal who now lives in London, where he works at George Northwood Salon. That, of course, includes all diplomas and certifications. “It’s relatively easy to obtain a work visa for the U.K. if you’re Canadian and under 31, but your application can easily be rejected if key documents are missing,” says Latour, who had to apply twice before receiving his visa.

“Save a lot of money, especially if your plan is to move to London, because this is a very expensive city,” cautions Bélanger. How do you manage to craft a career on the international circuit? We asked Canadian hairstylists who have established themselves away from their home and native land.

When you’re a young hairstylist, making it in one of the biggest fashion and cutting-edge hairstyling capitals in the world is no easy feat. But Montreal native Frédéric Bélanger has mastered this in three short years, after starting out with Gary Ingham, a highly regarded Aveda salon located in a posh and lush London neighbourhood.

How did he obtain this coveted position so quickly after arriving in London?

“To get the job at Gary Ingham, I sent my resumé and portfolio to an agency that works with hairstylists and acts as a liaison between talent and salons. A few hours later, I received a phone call from Rose-Mary, the lovely lady who owns the agency. I recall entering the chic and very posh agency with a purple mohawk, dressed as a punk and telling myself, “I will never get a job from her! She got me an interview with Gary and Sean, the owners of Gary Ingham Salon & Spa, and we connected straight away.”

For Timothy Switzer, Goldwell Global Master, Canada, playing an important role on the international scene has been a role that he has prepared for a long time, albeit unknowingly. In fact, he says, this position is the culmination of years of dedicated work in the salon: “It takes a lot of discipline and focus to better your craft. And when I was approached by Goldwell to become part of their global team, I think they recognized the dedication I’ve put in my career. It just doesn’t happen overnight.”

Surprisingly enough, owning and managing your own local salon doesn’t seem to hinder your ability to thrive on the international circuit. “I go to Asia maybe two or three times a year to train teams there, and then I’m off to Germany maybe once a year to work with the other global stylists,” says Switzer. He co-owns two salons now: one in Whitby, Ontario, and the other in Montreal with his husband, Simon-Pierre Daoust, also a Goldwell platform artist. “I always have time to make it back home and take care of my clients,” says the dynamo hairstylist who thrives under pressure and gets bored when his schedule is not fully packed!

Three weeks into his role with Gary Ingham, Bélanger called a meeting with his bosses to discuss the possibility of setting up a creative team, and that’s how he managed to get the position of creative director—one that he literally designed for himself.

They gave him all the freedom he needed creatively and a budget to hire the best photographers and materials to craft collections for competitions.

After six months, the team led by Bélanger entered the British Hairdressing Awards with a first collection inspired by the lost tribes of Africa. The second year, they presented a collection in front of a panel of judges from the Fellowship for British Hairdressing. This collection brought the art team on stage at Salon International and got Gary Ingham through for the London Hairdresser of the Year finalist in 2014. Quite impressive for a relatively unknown stylist who landed in the U.K. with a dream and a few
social media connections.