Though the pandemic’s lockdowns have impacted salons across Canada, there’s no question that the province that’s been hardest hit is Ontario. For salons in Toronto and Peel region, this meant being closed from the end of November 2020 to June 2021. And while the long-awaited reopening news helped owners breathe a sigh of relief, there continues to be a lot of work left to do.

“Our industry is in shambles right now. It’s been disrupted beyond return for some people,” says John Donato, owner of Donato Salon + Spa in Toronto, Etobicoke and Mississauga. “Operating at a 50 per cent capacity right now is not enough for us to fully get back on our feet. All that’s happening is that salon owners and hairdressers are getting squeezed on their profits, so hairdressers need to start thinking more like businesspeople.” 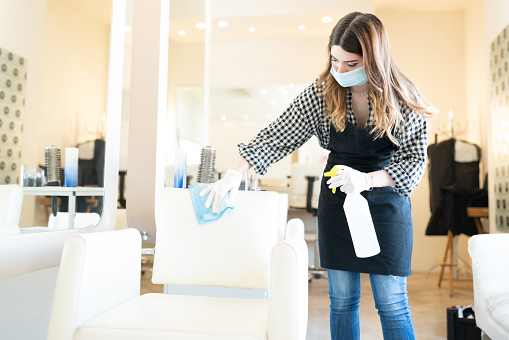 While some owners were able to benefit from the federal government’s business subsidies, for many salon workers, there was a heavy reliance on employment insurance (E.I.) or Canada’s Emergency Response Benefit (CRB), which, in reality, are a mere fraction of what many hairdressers actually earn while working behind the chair. “We’ve been fortunate that our business was able to benefit from the government’s help. Without it, I don’t know if we would still be open today to be honest,” says Felice Valvano, co-owner of Valvano Salon and Spa in St. Catharines, Ont., which was closed for more than four months. “We felt the most pain for our staff. Those who weren’t eligible for federal help did go out and do things on their own, but we were fortunate that they wanted to come back and work in a salon environment again.” Donato also empathized with his staff’s challenges. Acknowledging that the ones who only qualified for CRB did not receive enough money to cover their rent or bills over the course of seven months, he supported his staff’s decisions to find temporary jobs and new sources of income. “I think our industry has already lost a lot of talent to other industries because they realize they can work part-time—doing hair out of their house—while working on another career,” he says. “For anybody who’s been on the fence about their career in the industry, this has definitely pushed them out.”

Donato, whose salons are located in some of the country’s largest malls, wasn’t able to enter his businesses during the lockdown. He was in the process of relocating his Mississauga-based salon in Square One Shopping Centre until non-essential construction was halted during the lockdown.

For Lisa Dinh, owner of Lisa Dinh Hair Studio in Toronto, the experience she gained from the first lockdown ended up being vital for both her and her staff when it came to making sound financial decisions. “I learned to make sure there’s enough of a safety budget for the salon,” she says. “This time I was more prepared because we had already gone through it. Financially, we were lucky to be able to sustain everything—we made sure we took on all the loans and grants we could that helped keep us afloat. Keeping extra funds in case it happened again, which it did, was a good decision for us, and is something I’ll continue to do from now on for the future.”

From extending their hours of operation to changing their service menus, pricing and more, salon owners were forced to take a hard look at their business and identify opportunities to be more profitable—with the hopes of recouping as much of their lost revenue as possible. Some business owners found creative ways to be profitable, even while working under lower capacity limits and other restrictions. “With the capacity limits in place, it’s been tricky with how many people are allowed in the salon, while each of us are only working on one client at a time right now,” says Dinh. “As a team, we no longer do shifts, every stylist has a full day, and it’s two clients a day for the colour we do. We’ve extended our colour services to five hours to make sure to allocate enough time before we start the next client.”

Like many salon owners, Dinh implemented a fee last year to offset the additional costs of PPE and sanitization. However, she says she has since removed the fee as she considers the extra PPE and cleaning supplies to be a new standard in the industry.

In addition to adding extra time to services, Valvano and his team updated their service menu structure from an a-la-carte style to fixed pricing. “This really gave us the opportunity to analyze how to make improvements that we always wanted to implement but never really had the time to,” he says. “We noticed a lot of times in the past when we would try to break it down to the clients for full disclosure, it opened up an option for them to say they didn’t want something. It creates a problem because, in order to give that client the perfect end result we, as hairdressers, know what’s needed but clients don’t always understand that. So now it’s one price that includes everything.” “On a business end, it increased the price by five or 10 dollars without it being in the hands of the hairdresser,” adds Valvano. “I think, as a whole, hairdressers are afraid to raise their prices and they feel they have to justify it. You really need to take a hard look at your business and determine what it really costs you to run it, and what it takes to be really profitable.”

During the lockdown, Valvano and his team introduced an e-commerce platform via Shopify to retail their salon’s own haircare brand and gift cards. In addition, they changed their pay structure to allow for their staff to earn bonuses and incentives for reaching specific goals, including for take-home product sales. 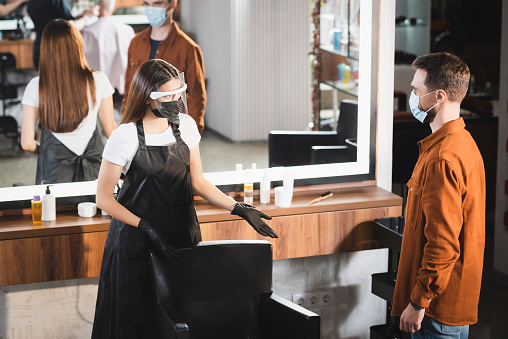 “As an owner, it’s important to work on your business as opposed to just working in your business.” — Felice Valvano, co-owner of Valvano Salon, St. Catharines, Ont.

As salons work on catching up on their backlog of appointments, Donato says a big issue he’s noticed is the increase of clients either not showing up or cancelling their appointments at the last minute. “Many clients aren’t being loyal—they’re calling five salons and booking appointments to see where they can get in sooner,” he says. “When a hairstylist has six or eight clients on their books and only four of them show up, that’s devastating. And when you want to try and fill that space, you can’t. Meanwhile, you have a waiting list of people trying to get in, yet people are not honouring their appointments.”

PRO TIP: In addition to raising their prices, Donato has implemented a $50 deposit policy that’s applied at the time of booking to help deter no-shows.

“I’m watching it closely because I’m seriously considering asking for the full price of the service to be paid for upfront,” adds Donato. “Many hairdressers are afraid to do something that others are not, but what they’re not realizing right now is there’s no competition out there—we’re only competing with ourselves. There’s a shortage of hairdressers and massive shortage of great salons, so my advice is to work on making your salon greater and charge your worth.”

While salon owners dealt with three-month shutdowns last year, the most recent lockdown has brought a new set of challenges. “It took a bigger toll on us and it forced a lot of salon owners to focus more on their overall mental health,” says Dinh. “I talked to a lot of salon owners during the time off and many of them have been focusing on the continued challenges of being closed for so long.” On the bright side, this lockdown was the first extended break in years for many salon owners and hairstylists, and encouraged people to look at their daily work life with a new perspective. Case in point: The concept of double-booking, which has been advised against throughout the pandemic due to social-distancing guidelines, and as a result has provided hairstylists with a more open schedule. “I think the silver lining in all of this is taking care of ourselves and our clients without burning out, which is a huge problem in our industry,” says Dinh. “Working on one client at a time preserves the energy of the stylist but also of the work for the client because the stylist has more time to reset.” “Coming back this time around, I noticed our team has become even stronger,” she adds. “I think because of the closure and time off, there’s more teamwork and it’s a far more supportive environment right now.” 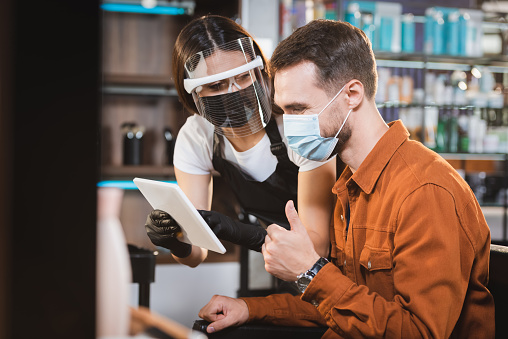