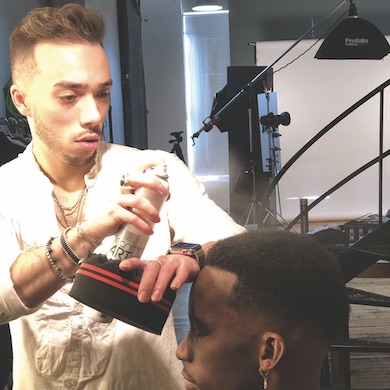 Next Wave of Talent: Lorenzo Hechter 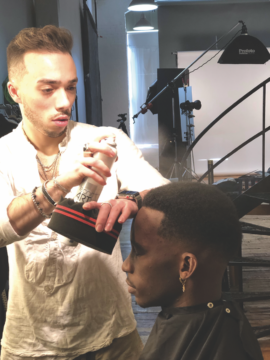 Coming from a family full of hairstylists, colourists and makeup artists, Quebec- based stylist Lorenzo Hechter was no stranger to the salon industry when he started working in it at the age of just 13.

“My father has owned a hair salon for a very long time, and I started working there just cleaning up hair and folding towels. When I was about 16 or 17, I started taking it a little more serious,” he says. “I graduated university and then went into the hairstyling industry as a full-time junior hairstylist at my father’s salon. From there I decided to get some experience at a few chain salons, and then I started working more on the fashion, editorial and corporate side, and started working with SSENSE, a Montreal-based fashion company, and that’s where I am now.” Hechter now works as a team lead and manager of hair and makeup five days a week and works one day a week at his father’s salon, Orbite.

“IF YOU STAY STRONG, KEEP PUSHING AND YOU GIVE THE BEST YOU CAN, YOU’LL ALWAYS BE HAPPY AND PEOPLE WILL SEE YOU FOR WHO YOU ARE.”

Growing up in a family that works in the salon industry showed Hechter what it could offer a stylist, but he never felt pressured to follow his family’s footsteps. “I was always really attracted to the hair industry because of how it offers more than just working behind the chair. My father is a fairly well know stylist within the industry, my mom is a makeup artist, and my stepmom is a colourist, so I’ve always been exposed to the industry,” he says. “From a very young age I always knew it was going to be one of two things for me. It was either going to be the army or hairstyling, and what really attracted me to the hairstyling industry was the business aspect of things.”

“I think because my parents had that artistic background, I wanted to give it a shot. The army would always be there, but I knew to be a good hairstylist you needed 10 to 15 years of experience under your belt, so I wanted to go for it and start young, and I haven’t looked back since,” he adds. “I think if anything, I wish I started sooner. I’m grateful to be where I am, but when I was a teenager, I was having fun and I didn’t take hair as seriously as I do now. I didn’t know if I wanted to go into it, and I feel like if I could go back and tell myself to jump into the ship sooner, I would’ve had more time to perfect my art and had more experience.”

Although he chose to become a stylist himself, Hechter shares that he’s learned very valuable lessons from his family. “I think from all of my family, I’ve learned to work hard. I was very fortunate to have been given a very comfortable lifestyle growing up and I’ve seen my parents work day in and day out,” he says. “My mother owns her own makeup counter, my father works five days a week, and the work life balance as well as just the art of putting in the work reaps rewards is one of the biggest lessons I’ve learned from them.”