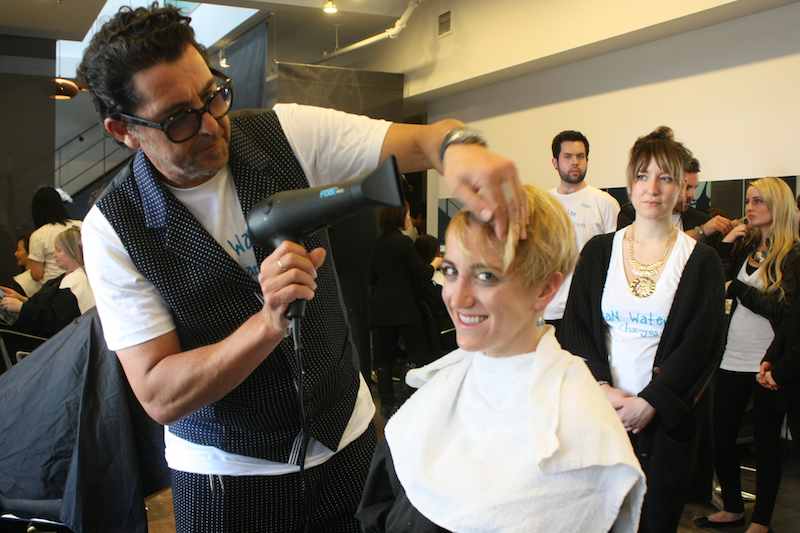 What: Aveda Civello Salons and Spas volunteered with Aveda salons and stylists around the world—including Tokyo, Sydney and Moscow—to try and break the Guinness World Record for most money raised by haircuts during 24 hours. A DJ kept the vibe energetic and pumping for the cut-a-thon, 100 per cent of which benefits WaterCan, a Canadian charity. The cut-a-thon is one of many events held during the month of April, where Aveda salons and spas focus on fundraising and awareness-building projects for WaterCan. Each location is encouraged to create their own initiatives during the month, from bake sales to clothing accessory sales and more.

Who: Aveda Canada CEO and president Ray Civello and staff from all four Toronto locations were on hand to greet guests, cut hair, offer polish changes and give relaxing massages. Aveda Canada set a fundraising goal of $590,000, part of a concerted effort to raise $5 million dollars for clean water, which is the total goal by the worldwide Aveda network for April 2013.

Why: “We chose to do something with direct impact,” explains Civello on why he chose to focus efforts on water-related issues. “Water is at the foundation, the most critical of world issues, and our industry also uses a lot of water, and so this topic is also relatable.” Civello visited Kenya to see the situation first-hand, which confirmed his resolve to spread the spirit of giving freely in the industry. Toronto location manager, Wesley Connor, along with Vancouver location manager, Andrea Hill, visited Ethiopia after being the top fundraisers in 2012. Connor put a photo of an African child at each station in his salon to remind stylists of who they were helping.

When & Where: April 22 at the Queen Street West location in Toronto, along with Aveda salons and spas from around the world.