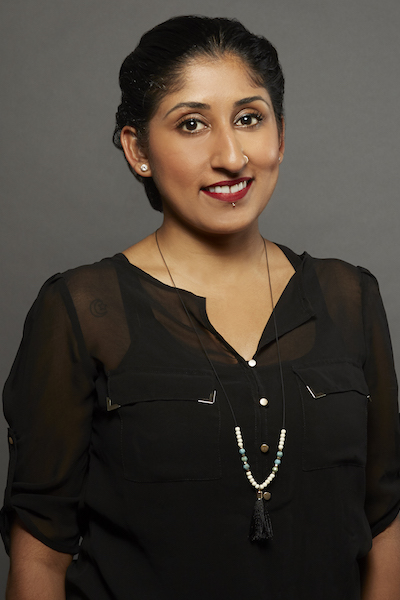 How did you get your start in the beauty industry?

In high school I had a co-op program and they placed me with Georgetown College in the Makeup and Esthetics department, and it kind of just went from there. I made a lot of connections and I ended up going to school there for makeup and then later on for nails. I wanted to get into nails because it was such a niche market and I was really inspired by one of my teachers, Jessica Ellison, who has also won Contessas. The industry was turning around a lot at that time. Nail art started to become a big thing—Shellac had just come out, and nails were becoming really popular again.

How do you feel about your win?

Super excited! It’s obviously been a crazy year for everyone, so it was nice that I got to enter again. It was nice that I was allowed to enter a past collection because with everything that’s happened—and how much work, time and money that goes into a Contessa entry—I doubt that I would’ve entered any other way. I was pretty surprised and happy that I ended up winning.

What does this win mean for you?

How did you come up with the looks in this collection? What was the inspiration behind it?

It was ’90s inspired—specifically ’90s pop music. I grew up in the ’90s so it’s definitely very nostalgic, and I felt like at the time that I did the collection, it was starting to become a trend. And now, ’90s is huge in fashion. It was a modern take on the ’90s, of course, but a mix of all my favourite things from the ’90s. The collection was also inspired by Madonna because she was definitely the pop queen of that era, so when I was looking for references for my mood board, she just kept popping up.

What are some of the techniques you used to bring this collection to life?

For the look with the lace on the model, those nails were an ombre base with a 3D stripe over top of it. I wanted to create an illusion that the stripes were coming out at you, over the ombre base. For the image where she’s blowing bubble gum, that one was inspired by a 3D Tetris cube, so also a bit of an optical illusion. I’ve done that in some of my past entries, too. I like that dark style where its nail art but also an illusion in a way. For the third look, I did colour blocking.

Why did you decide to enter the Contessas this year?

I think the main reason I decided to enter was because [Salon] made it so much easier by being able to enter a past collection. Like I said, this year was so crazy that I don’t think I would have been able to enter otherwise. It’s so fun that we’re still be able to do things like this.

Why do you think competitions like the Contessas are important for nail artists?

I think it definitely helps to get more notoriety for the industry because nails, unfortunately, can sometimes be an afterthought when it comes to editorial, or even in general for some people. It’s kind of the last thing that people might think of, even though it’s major accessory, especially because your hands are showcased quite a lot. I feel like it definitely helps us to be recognized, it motivates us to do better, helps us stay on trend and shows that we’re just as important as anybody else in the beauty industry, like a hairdresser or makeup artist.

Where do you get inspiration from? How do you stay creative?

I get inspiration from anywhere. Of course Instagram and Pinterest are huge, but just seeing artwork on the street or architecture is inspiring to me. Even what my client may be wearing that day, or as you get to know your clients, you learn about their style and what they would or wouldn’t like, and that’s helpful as well.

When we were locked down, our salon did press-on nails that we were retailing, so that definitely kept me up on constantly doing nails. However, I did dabble into other forms of art, which actually was a blessing because I’ve always wanted to dabble in other forms of art, but I just never had the time or space. I did a lot of different things like acrylic art, watercolour, crochet and embroidery. I dabbled into all those little things I’ve been wanting to do for years but I’ve just devoted all my creative time on just doing nails, so it was nice to open up my creativity.

What do you most enjoy about being a nail artist?

What I enjoy most is being able to be creative every day. I enjoy constantly meeting new people and being inspired by them, their personalities, and their style; especially people that come to me with different ideas that help me push the limit and test out new trends.

What are the top three things you must always have in your kit?

Definitely cuticle oil, a hand scrub and nail glue. Everything else is pretty basic but those are extra things that definitely need to be in there.

Do you have any goals you can share with us?

I’m pregnant right now, I’m due in a month, so I’ve not thought of future goals. I’m just thinking about that right now but, I am trying to up my social media game if I do have the time when I’m off.

Contessas have always been so inspirational to me, especially ever since one of my teachers, Jessica Ellison, would always enter. I would see her artwork and the awards she had won when we were taking classes with her, and it was always a big inspiration. It’s nice to try and constantly push the limit, push yourself at the same time and come up with new ideas and looks. I constantly do that on a regular basis and if I do see an inspirational image, I keep it tucked away in my Contessa folder for future ideas. It’s one of those things that I try to dedicate so much time and mental energy into that I think about a lot beforehand.

Do you have any mentors?

Jessica Ellison has definitely been so inspirational. I’m not necessarily in contact with her as much now, but I know a lot of the girls we hire at Tips have been taught by Jessica. It’s nice to know that Toronto is small in that sense, too, where we’re all connected. The owner of Tips, Leeanne Colley, has been a big inspiration over the years as well. Just having access to social media and being able to be inspired by people all over the world is a big inspiration, too.

What has this past year been like for you?

It’s definitely been a tough one, for sure. Personally, I think the first lockdown was probably harder than the second one. I was still hired on by Leeanne and I was doing all of our social media while trying to pivot and do different things. One of the positive things that came out of it was that because I’m also with Page One, which is an artist agency, I was able to do a lot during the second lockdown. I was doing editorial work and working on film and television a lot more. I was constantly doing television stuff, so at least that opened up my world to that part of the industry quite a bit. There were some positives that definitely came out of it as well. I think, like any industry, we did lose some people, or they did change their career paths, but at the same time our core team has stayed and is still passionate about the industry and we’re happy to be back at work.