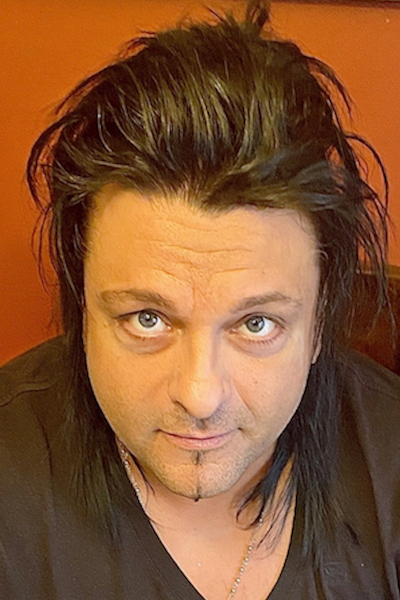 How did you get your start in the hair industry?

My parents owned a restaurant and it just so happened that there was a bunch of hairdressers at the table. My father ended up knowing them and I told him I was interested in hair, so he introduced me to them at 17 years old. The owners of the salon said to come in the next day—no resume or anything. I went and haven’t left [the industry] since.

What do you love most about your job?

I like everything, to be honest with you. At the end of the day, it’s to put a smile on somebody’s face and to make them feel better. That’s the whole thing—just to lift somebody up, help them realize they’re beautiful, and to look good and feel good on the inside and out. To bring that out in somebody, that’s a gift on its own.

How do you feel about your win?

It still feels surreal. It’s an honour to win a Contessa for sure and to have it underneath myself is an awesome feeling. It’s fantastic! Sometimes I think, “Did I win?” Sometimes you’ll rewatch it or people are congratulating you and then you go back and watch it, it feels surreal.

Contessas is something that Canada looks forward to once a year, it’s held very highly—it’s almost like the Olympics for hair is how I put it.

Why did you decide to enter the Freestyle category?

It’s just that one shot that just captivates somebody. It grabs them and brings them in. I wanted to do something on both ends of the scale and kind of bring them all together as one. Just got one strong image, which is what I felt I created, and that image was something that would grab somebody and bring them in to look at it twice.

What was the inspiration behind the photo?

From one end to the other, it’s like taking something so very creative, so very out of the box, but still having some normalcy in there. Something you could see somebody actually wearing. Maybe not to that degree but still that kind of even like “Hey, that’s doable. I could do something like that.” It makes you think, “Yeah, that is kind of out there, but somebody would wear something like that.” That’s the way I kind of approached it. It was combining different haircuts, and you know things in your mind as you’re going, and then looking at it like “This is working all together, it will fit.” That’s how I looked at it. 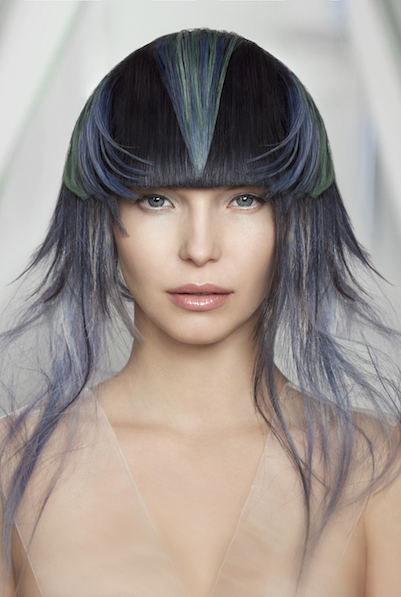 The hair colour is beautiful! How did you choose those tones?

I know how striking my model is, so I wanted to make that colour focus all around her eyes. She just drags you in because her eyes are so striking, so I went to pick the colour, drawing it all into those points and those loops coming around in at the top of the head. The colours complemented each other; from very dark to very pastel to white, blueish and then a hint of the green coming through. And then the black dragging all the way down.

What techniques did you use to create this look?

I just wanted to create a nice geometric shape in there somehow—straight lines against the shattered, solid block of colour with the shattered piece on top, playing more or less with textures. Playing with the different elements of the hair and incorporating that.

Your team at Salon Gaboa also won Salon Team of the Year. What was that like?

It was awesome. I’m happy that Frank won—it was great. Their work is beautiful. Like I said that night, everybody’s work was awesome—just top shelf. It’s an awesome feeling and the salon energy is up, so everyone is in a great mood.

Tell us about your team and what you most enjoy about working with them.

It’s a team so everybody gets along and works together. Do we get down each other’s throats? 100 per cent. But that’s what team is. You look out for one another; you have each other’s back. Constructive criticism, so nobody gets offended and everybody works together as a team. To be able to work as a team is a big part of it, too.

Why do you think competitions like the Contessas are important?

It’s for both the individual stylist and the industry as a whole. It shows Canadians do amazing hair. Canada is huge! The Contessas are looked at as the Olympics for hair in Canada. It’s one night that everybody gets together and celebrates. It doesn’t matter what company you’re from or if you’re a freelancer, if you’re at this salon or that salon, if you’re downtown or uptown—everyone just gets together and celebrates the best of the best. In turn, there’s self-gratification as well because you know you’ve poured your heart and soul into the photo and everything. It goes hand in hand.

How long have you been entering the Contessas? Was there anything in particular that made you want to enter this year?

I’ve competed [in other competitions] quite a bit, but I think this is only my second time entering the Contessas. I wanted to enter because it’s just something that I’ve wanted to do. I’ve entered Wella’s TrendVision and won that quite a few times and I’ve competed in [OMC Hair World].

Do you have any advice for anyone entering competitions for the first time?

Like you’ve heard 1,000 times, just find a great mentor—a great mentor that’s going to work with you and teach you. They’ll help you, and for you to just to be on set and around it, you’ll start to pick up little things here and there. Just to have them in your back pocket—find a great mentor or someone that is going to inspire you.

Who are your mentors?

Frank Dicintio from the salon. He was an awesome mentor. He showed me a lot about photography work and a lot about models.

Where do you turn to for inspiration?

It could be from a lot of things: magazine covers, looking through Instagram, other stylists, European magazines, all that sort of stuff.

What has this past year been like for you?

It’s been hard for everybody with COVID. The salons have been closed, open, closed, opened. At least up here, in Woodbridge, we got to open a few times and then we got shut down again. It’s been challenging and hard on everybody. I say it every day, it’s just changed the way we look at each other, the way we talk to each other, the way we touch each other—everything is difficult. You just always got to keep your head up and keep moving forward. I know sometimes it’s easier said than done, but you always have to keep thinking of the positive. You’ve got to spend more time with family, be home more often, stuff like that. I always try to find that positive spin on everything. It’s not always easy, but if you can just somehow get through it, it makes it a whole lot easier if you’re always thinking of the brighter side. People always get better and things will always improve.

What’s next for you? Do you have any goals you can share?