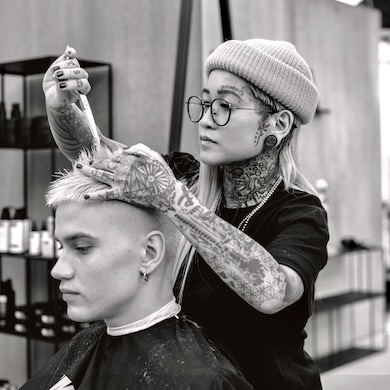 Discover how Los Angeles-based barber Sofie Pok is shaking up the beauty industry with her approach to her craft. Plus, learn about the gender-neutral grooming brand she co-created. 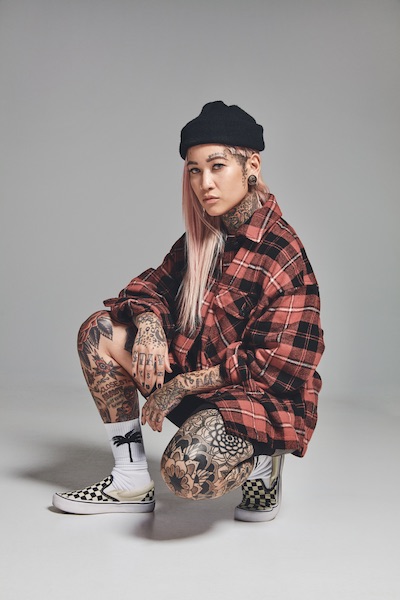 How did you get your start in the industry? Did you always know you wanted to work with hair?

My family came to America [from Cambodia] during the war in the 1970s. Being born first-generation, they were always pushing us towards the academic route; a very typical upbringing. I started college to pursue business admin and there was just something in me that was questioning that decision. One day after class, I was talking to a friend and she asked me to give her a trim; she had long hair and just wanted me to dust off the ends. Prior to that, I had no experience in hair and nobody in my family does hair. I used paper-cutting shears in my mom’s backyard and my friend suggested that since I was undecided [about my profession], I should consider hair school. It had never crossed my mind before but I decided to try it out.

When I finally made the decision to pursue hair as a career, my family didn’t approve. I actually had a small falling out with them to pursue something that I felt like I needed to try for myself. I had no idea where it would take me but I just continued going to school, got licensed and I tried the salon route for a year but wasn’t quite happy. I was struggling a lot; there’s a lot of pressure at a young age to figure out if you want to be master cutter or colourist. Before giving up, I decided to try a barbershop. I found a local one on Craigslist and the owner really liked that I was eager to learn; I wasn’t very good, I was just interested. He took a chance on me and that’s kind of where I ended up for four years—just really fine-tuning my initial skill sets. There was something about how difficult it was that intrigued me. I found cutting short hair and sculpting tight hair to the scalp to be very therapeutic. It was challenging and motivated me to keep going. It was more fast-paced and fun.

Would you say that your hairstyling skills have helped you become a better barber?

Yes—100 per cent. I think in beauty school, they teach you a lot more structure in terms of the way you handle your business. I remember in the first barbershop I worked in, anyone that had a cosmetology background was almost more favoured because of a double skill set. Clients shared that they were tired of going to a stylist for the top and a barber for the sides, and being a “hybrid barber” meant you could cater to more people because of your varied skills and experience.

You mentioned that you had a falling out with your family over your decision to pursue hairdressing. What helped change their mind?

With traditional parents, you can’t really explain to them why it works—you’ve got to show them. It took years for me [to prove myself]. I needed some sort of physical proof, like magazine articles, that I was going to be okay and be able to take care of myself.

My mom didn’t know that travelling and teaching meant that I was being paid. The magazines helped her see that people were writing stories about me. The first time she saw me at a trade show was in 2019 at ISSE [International Salon & Spa Expo] in Long Beach. It was the first time in the 11 years that I’ve been in the industry that she finally saw me on stage and she could finally understand it. It was just the cutest memory. I almost cried! 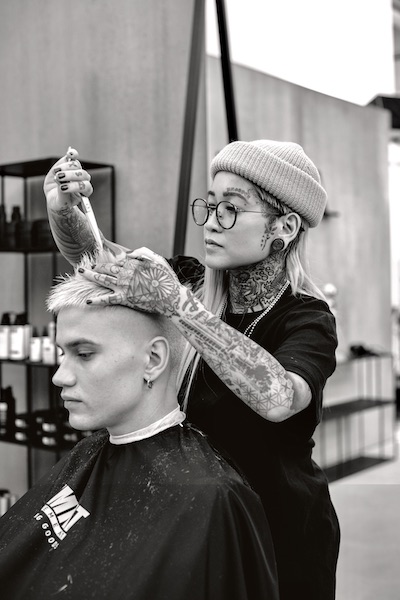 What are some of the challenges you’ve faced as a woman in the barbering industry and how did you overcome them?

Working in three to four different shops in the early stages of my career, I was always the only female there so I was always challenged by being singled out. It was always a part of my fight. There were a handful of times when guys would walk in, see a shop full of people and if I was available, they would question why. Was I not good? Do I know how to fade? Or they’ll consider me to be only a stylist. A majority of my work is barbering, but because I’m a woman, it’s assumed that I’m a stylist; someone who works with long hair and doesn’t use clippers and razors. It used to bother me early on, feeling pressured that I had to ask people to give me a chance. It’s actually how I got on Instagram; my presence there was a way for me to build an online portfolio to avoid those conversations. I could ask clients to look at my work before they made any judgment or decided to sit in my chair. It was the start of building my clientele.

I’ve seen a shift; When I first started, it was very traditional and masculine. I left one of the first shops I was in because I felt like I couldn’t be myself. It was in Orange County and we had a lot of LGBTQ+ customers who felt very uncomfortable about going into barbershops, so a lot of people started coming to me because they had different labels and I never made people feel uncomfortable; I was always very welcoming. I think what happens is that some guys may feel uncomfortable or not know how to handle it, so it comes off the wrong way or like they don’t want to serve somebody. Now more than ever, salon culture has to be welcoming to everyone. If you don’t make people feel comfortable as a whole, those are the shops that will weed themselves out. Hair is genderless; whether you’re cutting off a lot or a little, hair is hair.

Congratulations on STMNT Grooming Goods, a brand you co-founded with Julius Arriola (aka. Julius Caesar) and Miguel Gutierrez (aka. Nomad Barber) that was launched in the middle of the pandemic. Tell us about that.

We actually collectively came together around 2016, when the ideas start to form, and in 2017 we fully got involved. Oftentimes as a barber, we’re approached by brands that are already existing and you kind of slap your name on it and then you become an ambassador. This opportunity was different because we got to create everything from scratch— the packaging, formula, name and what it means to us. It’s special because we made a decision on every part of that process.

We wanted to make sure that this was a gender-fluid line and that’s why it’s not “men’s grooming” but “grooming goods.” It was very important to us because STMNT is for all walks of life; it’s for being able to customize your looks differently because hair has so many elements that make it different. The products all work in harmony so you can create custom formulas for every person who comes into your shop. The layering effect is not something that I’ve seen highlighted with other product lines. Whether you’re in a salon or barbershop, it’s so necessary just to know that there are products you can layer that aren’t going to cancel each other out.

You mentioned that you wanted STMNT Grooming Goods to be gender-fluid. We’re also seeing a shift to more gender-neutral pricing, salons and barbershops. Why is that important to you?

It’s the times we’re living in. I think it needs to be stamped even harder that there’s really no room to just create one lane for people anymore. As individuals and as a brand, I think it’s so powerful to lead by example because it helps other people be more open to the idea as well.

I’ve had people reach out to me from areas that are struggling with this concept, and where people can’t even get service because of how they look or what they identify as. We try our best as a company and a brand to make sure people know this is what we believe in because this is the way it should be. Hopefully more people will feel inspired to just be more curious and think about something that may be a little different than what they’ve always known.

What’s next for you? Anything you have coming up or that you’re working on?

We’re actually working on a second batch of products for STMNT and trying to add a couple of new things to what we currently have. I’m also working on an online barbering academy. I’m super excited about it and have wanted to do it for a while; the pandemic made me think about it even more. I feel like 50 per cent of people want to travel and learn while some are too afraid, so being able to create a way for people to learn from wherever they are—being able to deliver high-quality videos and lessons to a variety of people—would help the industry grow. It’s also an opportunity for me to teach things I’ve learned throughout my career.