Salon Designs That Think Outside the Box

We all know how important design can be in creating the perfect space for your clientele. Find out how these two Canadian salons took “thinking outside of the box” to a new level. 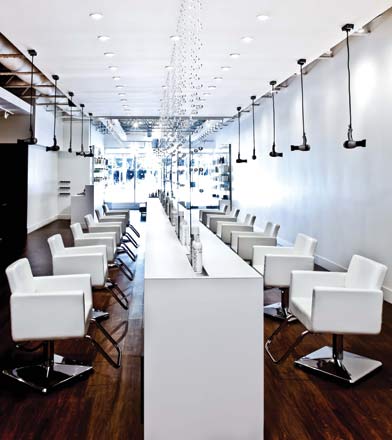 Space salon in Vancouver features a “space within a space” design, with everything from the shampoo to colour to cutting areas customized to create their own unique space. “Each zone has a different energy and feeling,” says salon owner Michael Levine.

Formerly a bank, Space’s pièce de résistance is the bank vault, which has been transformed into the salon’s colour processing area. “I always thought it would be so cool to have a location with a vault in it. But when I looked at the vault, it seemed really small. So I was thinking about what we could do with it and then realized we could seat six people and have hooded dryers in there,” says Levine. “Now, once when we’re nished at the colour bar, we move our clients [to the vault] to process. It has two televisions and a couple of coffee tables with a ton of magazines.”

While Levine didn’t work with a designer for any of his salons (opting to gure out the space by himself) he hired a team to core out a 14-inch hole through the ceiling of the vault in order to install ventilation for the dryers. “It was like breaking into the vault, like in a heist movie,” he says. “Once we knew that the layout of the space was going to work with our colour bar, everything else just fell into place. The vault became a huge selling feature for me.”

“Clients are surprised the space came with [the vault]. They think I installed it,” adds Levine. “I’m not the type of person to install a design element like that. I don’t do things that are superfluous—I tend
to do things that are more organic, and I like to use found items. My aesthetic is function before form, so I try to maximize my space as much as I can.” 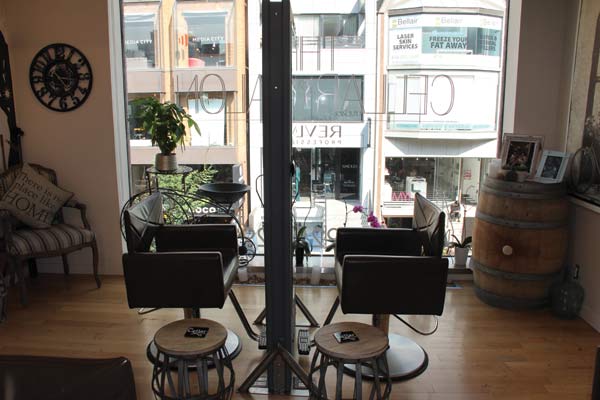 After moving locations in Toronto from the Avenue and Davenport area to upscale Yorkville, salon owner Aaron O’Bryan wanted to maintain his salon’s overall aesthetic. “I wanted to keep the same warm, friendly vibe, where it didn’t have that overly pretentious, clinical feel to it. It’s very welcoming; almost like you walked into an Irish pub, and because my background is Irish, I drew inspiration from home.”

With his first location in a basement, it inspired O’Bryan to turn the space into one reminiscent of a wine cellar. “We were starting from the bottom and working our way up,” he says. “We included concepts of a cellar, including wine barrels, wine barrel tables and antique pieces. Now, even though the salon is on the second oor [at its Yorkville location] and it’s about four- times larger, we wanted to keep the décor very similar.”

O’Bryan and his husband Jay worked with the team from The Marilyn Denis Show (O’Bryan is the show’s resident hair expert), sourcing and refurbishing antiques, such as vanity styling station and a retail armoire from local antique shops. “I don’t like to just throw things out. I think you can always turn something into something else; that’s why we do a lot of refurbishing. I like to be creative, and it was fun to do.”

The salon’s pièce de résistance is its wine barrel chandelier in the reception area. “People always comment on it,” says O’Bryan. “It’s a wine barrel sourced from Niagara that was cut in half and converted into a chandelier; custom-made with warm lighting to feel like you’re sitting at a warm re, and to create a calm atmosphere for our clients to sit, read a magazine and relax.”

While O’Bryan and his team have nailed his salon’s wine cellar décor, he says there’s only one thing missing. “We’re working on getting our liquor license and will hopefully bottle our own wine someday,” he says. “To have ‘The Cellar’ wine that’s made in Canada would be the dream.”