We followed Cutting Room Creative Owners Edwin and Fiona Johnston as they bought a new salon space to expand their business. Here’s Part 3 of how they survived a huge renovation around the holidays. Look for the big reveal of their new look in the April issue of Salon Magazine!

Read Part 2 of Salon Reno Diaries: Creating the Plan, & Sticking to It. 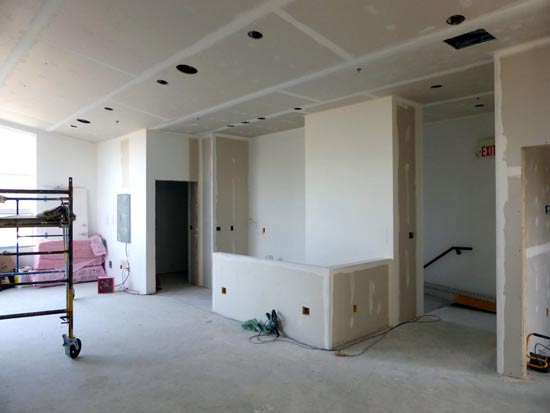 Choosing a contractor was simple for the Johnstons. They went with the people who built the complex to finish the unit they purchased. “They are a very highly respected company in Nanaimo, so it was an easy decision for us,” says Edwin.

After multiple meetings, the plans were drawn up and handed over to the contractor, who gave the Johnstons a weekly spreadsheet that outlined what would be happening during the construction. While keeping their old salon open for business during the renovation, either Edwin or Fiona stopped by the site each day to check in on the progress. “We didn’t want to micro manage; you hire the right team and trust their work,” says Edwin.

But even the best laid plans can have it’s challenges, as was the case with this, including cutting back furniture in order to stay on budget. “The budget probably expanded by 15 per cent, as it’s easy to spend more or upgrade everything from tiles to speakers.”

To avoid any unnecessary post-renovation expenses, Edwin and Fiona reviewed the electrical and plumbing plans a few times to make sure everything was in the right spot before flooring and drywall were installed. Extra wiring for another hot water heating systems, was also installed, in case the two tanks they had couldn’t produce enough, making the additional installation a quick and easy job. “We have really tried to think of every scenario and I guess that’s what 58 years of combined experience gives you,” says Edwin.

When it came time to move in on Dec. 22nd, Edwin says the busy holiday season was actually a good time since they could regroup over the holidays. “It was good because we were closed anyway,’” explains Edwin, “Working a regular day and then having to stay to get stuff done; you’d go crazy.” In between the holidays and New Years, Edwin and Fiona made a couple of Ikea trips to buy some extra storage they thought would be useful after they spent a few days working in the new space.

Following a trial run opening in late December, Edwin says the staff morale was instantly elevated thanks to the new space. “They’re all dressing up more, and feeling more prideful and excited about the new look,” says Edwin. Clients are also enjoying the fact that there are plenty of windows along with accessible parking.

With the salon renovation complete, the Cutting Room Creative is working on a marketing plan. The first steps have included a website makeover to help promote the new location, and a grand opening party will follow.