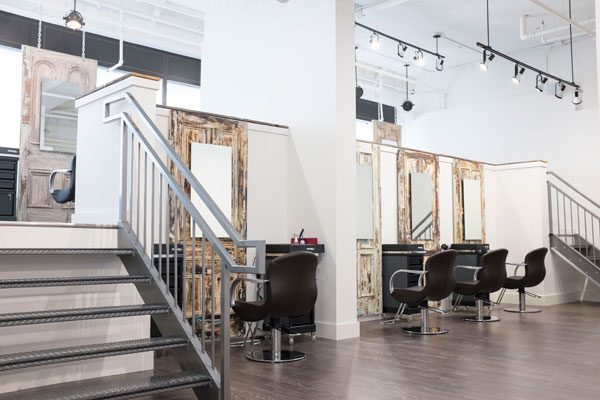 When Francesco Fontana decided to open a second location of Studio Fontana in the King West neighbourhood of Toronto, he was making his dreams a reality. After being in Yorkville at his first location for over 15 years, he knew that it was time to make a change and bring a different vibe to his salon style, creating a shared salon space that offers more than just hairstyling, cutting and colouring services, but also a photography studio as well. Fontana explains, “I worked with Trevor Sorbie a long time ago and he had a little studio away from the salon where he went to create and I thought that, someday, I would love to have a space inside a salon that included a photography studio.”

The salon includes styling, colour and washing stations, but also encompasses this photography studio that can be viewed from almost everywhere in the salon. With the hopes that this photography studio would not only be a space for up-and-coming hairstylists, photographers and makeup artists to shoot and build their portfolios, he also wanted it to be a space for his own staff. “Most salon owners think of their clients first and staff second, but if you put your staff first, the clients will follow,” adding that giving his own staff opportunities to use the studio as well so that they can get creative beyond the chair. The space itself incorporates a industrial but cozy vibe, with white walls and steel elements, warmed up by distressed wood doors that bring some character into the large salon and serve as the backdrop for each of the styling stations.

Working alongside makeup artist Cheryl Gushue, these lofty plans include classes and seminars for makeup artistry, creating successful photo shoots and even offering the space to other like-minded companies and agencies for classes and events.