Taking a Look Inside Toronto’s HoldenGrace

In Toronto’s High Park neighbourhood, one salon is offering a premium experience that includes everyone. 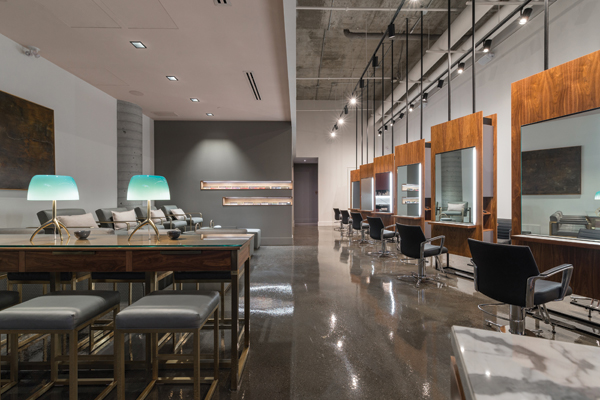 “We always wanted to work together,” says Mirka Srom, who, along with her husband, Ethan Dann are the co-owners of HoldenGrace, a hair and nail salon in Toronto. Having been together for nearly 20 years, Srom says their history has helped the two make decisions—especially those related to their brand—relatively easily.

“When we think one idea is the way to go, we use a lot of images to explain our vision and we always have a great conversation,” she says. With such calm, level-headed approaches to everything from design to the inner workings of HoldenGrace, it’s little wonder that the space is equally relaxing and down-to-earth.

Having a nearly 2,000-square-foot space to work with allowed the couple to create the open-concept layout, and working collaboratively with an architect, meant they were reminded of key details, such as ensuring enough wooden studs were in place should they need to add more shelving to the space in the future.

With their shared minimalist style, Srom and Dann wanted the salon to have a high-end boutique-hotel feel, which they achieve through features and nishes that are far from expected. For instance, the manicure and pedicure stations feature chairs that could easily be found in a chic hotel lobby, or even your living room.

When it came to setting the right tone in the space, they recognized that the choice of colour palette has the ability to greatly impact a minimalistic space. “We gravitated to an Acme studio pink to soften the three shades of grey,” says Srom. 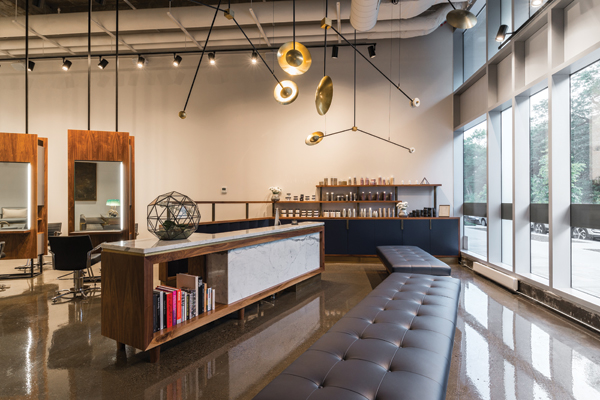 Although the two originally scouted other areas of the city for their salon, when they saw the space in Bloor West Village, they felt the neighbourhood naturally leant itself to clientele who would appreciate both a relaxed and upscale atmosphere. “Our aim is to see no age or real demographic but to offer a place for escape,” explains Srom. Growing their nail team happened quickly, which translated into the salon becoming a hot spot for nail services—especially nail art. In keeping with providing services for all ages, mini-manicures for children 12 and under are also offered.

Adhering to their barrier free mentality and premium experience, from the back of the salon to the front, clients are treated to an unobstructed view of the trees in High Park. As the business continues to grow, Srom says she and Dann are scouting additional locations for future opportunities to bring this accessible beauty experience to other areas of the city.