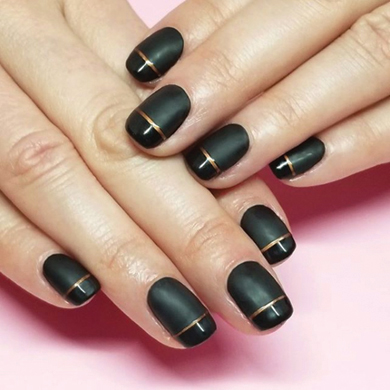 Taking Your Nail Looks to the Top

From matte to chrome and everything in between, nail finishes can make or break your client’s nail look.

“Texture is big right now,” says Tamara Di Lullo, an education ambassador for CND and owner of Candy Nail Bar in Montreal. “Contrast is still important, so mixing matte or textured finishes with super slick and shiny is very on trend.”

While we’ve seen matte and chrome nails for the last few years, there’s a revival of different nail effects, such as holographics, for a more multi-dimensional, customized result. “Chrome is still cool, but we are seeing more transparent chromes rather than the initial opaque pigmented chromes,” says Di Lullo. “I personally like mixing chromes and doing ombré effects to keep it fresh, or using chrome pigments over a lace or webbing to create a textured pattern.”

“Seeing variations on chrome proves that what could have easily been an in and out trend is now a formidable staple in a manicurist’s nail
art arsenal,” adds Chelsea Baart, a global artist and educator for OPI who’s based in Victoria, B.C. “Matte and chrome are being given new

life with simple upgrades, such as adding glitter or reflective inlays under the matte finish for a softer, ethereal look. Polishing or stamping on top of chrome for dimension and variety is another popular trend right now.” 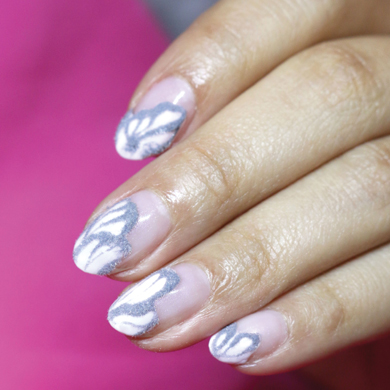 More often than not, your client’s nail art request is not always available in a bottle. Baart recommends getting creative with the use of nail pigments, such as loose glitter, on top of an uncured gel top coat. “Gently pat it down with a gloved finger, cure for 30 seconds, and brush off excess glitter,” she says. “My favourite nail hacks for creating texture are the ones that utilize the products I already have at my nail desk. For example, if I’m working with acrylic, a variety of products can be used depending on the effect I’m creating, such as dotting tools, needles, netting, dental floss and nail scrub brushes.”

With Fashion Week providing some major #nailinspo, Di Lullo says it’s important not to get intimidated by the extravagant looks. “I try to take my inspiration from art and fashion trends, and less from nail photos,” she says. “If a client asks me to copy a design, I’ll always try to do something different or out-do myself. It’s all up to us to interpret for our client’s needs.”

Genie in a Bottle

Another texture to consider adding to nail looks this fall is leather, which can be achieved with select shades in OPI’s Grease collection. “It’s an easy to try, non-committal foray into the textured nail world,” says Baart. For clients seeking a bolder look, OPI’s Pop Culture line includes 3-D e ects, such as bubble-like particles.

Instead of using a matte topcoat, di lullo recommends delicately buffing the topcoat for a super matte effect, or using a cosmetic sponge to create a simple textured look for contrasting- coloured gel manicures.