The world of hairstyling is one fueled by passion and creativity, but nothing steps up a hairstylist’s game like a little competition. The live competition Battle of the Strands is now a reality television series Global Beauty Masters, airing today on Discovery Fit & Health. 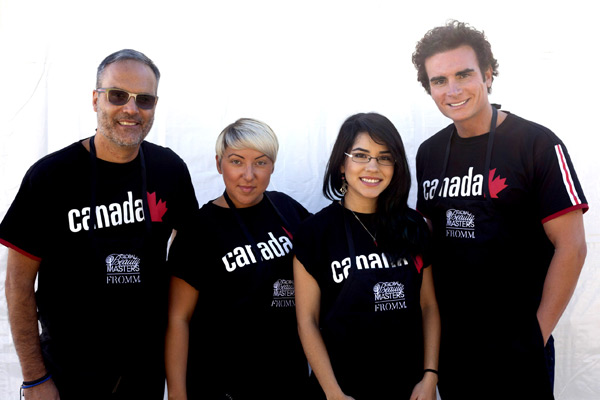 Nine international teams, including one from Canada, will be taking part in a series of challenges, ranging from avant garde to consumer styles. Team Canada included Gaincarlo Intini as artistic director and team leader, 2014 Contessa winner Stephanie Schewe, Jocelyn Santos Thompson and 2014 Contessa winner and 2015 Contessa finalist, Sandro Macri. We caught up with Intini to get the inside scoop on this competition and some of the lessons you can take home from this.

Pick the people along with the talent

When selecting his team, Intini explained that as important as creative vision was for him, it went beyond that, choosing team members that had personalities that worked well with his. “It was important that they had creative talent, but if they didn’t translate well on film, then we [weren’t going to succeed].”

Think on your feet

Intini explains, “we were able to bring the products we wanted from home, but because we didn’t know what the challenge was, a lot of things were up in the air. We started to realize ‘we might need this next time.’” After receiving instructions about the challenge (in one case, the teams had to create a look fit for the front cover of a consumer fashion magazine, keeping in mind that it couldn’t be too avant garde), the teams were given two hours to complete it and chose a model and had the option to choose clothes from a wardrobe stylist, as well as products to help achieve their look. “Everything from makeup to hairspray to flat irons to body paint,” as well as what they brought with them.

Intini explained that in his case, his various experiences contributed to the success of challenges like this. Everything from working in a salon to photo shoots and even with bridal parties contributed to being able to complete a look within a restricted time fame without losing his cool. As for coming up with an idea on the spot, Intini explained, “With three or four opinions, you start to realize which direction feels better,” and that everyone brings their own expertise and creativity to the table.