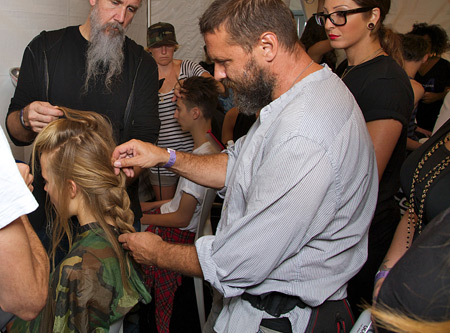 The Most Candid Editorial Hair Shoot Advice You’ll Ever Hear

Want to know what it’s like to shoot with editorial hairstyling veteran Kevin Ryan? Whether it’s backstage at New York Fashion Week or front and centre at UNITE’s Global Session, Ryan’s no-nonsense, (and hilarious) approach to his demonstrations is always chocked-full of great advice. Sometimes, even including celebrity styling secrets (Kim Kardashian is nice; Naomi Campbell is a nightmare!), or encouraging the audience to shout out any questions they have while he works. (The most burning one? Yes, he’s a married man.)

1. Ryan says it’s important to work well with your team on set. “Things get changed. It’s not all about you.” Your best bet is to go with the flow and be able to switch up styles quickly. Ryan does this by bringing hair pieces and not using too much product so he can give models a new look fast. He recommends getting a good base blown out with lots of volume. (Try UNITE Expanda Volume.)

2. Remember: you’re only going to see one half of the hair style. If time is of the essence, don’t worry about the back of your model’s hair. “Everything can be fixed. Worry about the final image, not the little bits,” he says. “I’ve learned to just be free.” Don’t over think it, or over-style the hair.

3. Ryan says to let the photographer find the right light. “Lighting is key. [It] should take texture, colour, and sheen into play,” says Ryan. When working outdoors, pay attention to how much sunlight time you’ll have. If the weather isn’t ideal (damp or windy) let that influence your style instead of trying to fight against it.

4. Just because it’s editorial doesn’t mean it has to be fancy. Ryan uses a tool belt from the hardware store to carry all of his supplies and occasionally brings a leaf blower on set to create just the right wind-blown effect in his photos.

5. Once you’ve finished your initial look, take a few frames, then go fix what you don’t like by playing with hair and moving it around every few shots. “Don’t panic if it’s not working right. Walk away. Don’t get too close.” He recommends watching what’s being photographed. If you see something you like in the images, it could inspire you to go in a new direction!

6. Trends always repeat themselves, so brush up on your fashion history. “You better know who Twiggy is,” says Ryan. When it comes to building your portfolio, call a fashion college and work with other students on shoots, and send your work to editor’s at magazines you love. “Just stay hungry,” says Ryan. “The hungry survive.”

Images courtest of UNITE, backstage at the Baja East show at NYFW