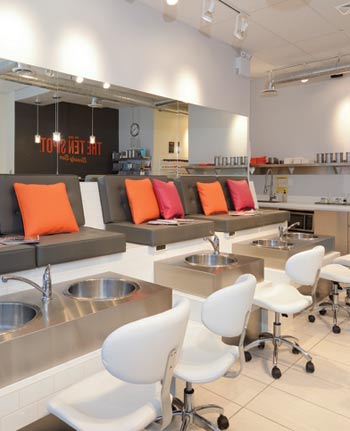 The Ten Spot’s flagship Queen West location in Toronto gets a revamp as it expands its nationwide reach.

When Kristen Wood, CEO and creator of The Ten Spot, opened her first location in the Queen West neighbourhood of Toronto in 2006, she was filling the gap between the quick and super-affordable nail salons and high-end spas, giving mani-pedi mavens “great-quality service without being ridiculously expensive and without compromising on cleanliness standards.” Now, almost a decade later, the brand has grown to encompass 14 corporate and franchise locations (with more to come), so the design of The Ten Spot flagship location is even more important.

After opening more locations and branching out into the world of franchising, Wood decided it was time to bring the original Queen West location up to par with some of the newer locations, which meant “sprucing it up” to match the evolving esthetic of the brand. Wood explains, “I wanted everything to visually communicate our dedication to health, safety and hygiene standards,” which meant creating a space that is clean, precise and straight to the point while maintaining an inviting atmosphere. In all facets of the salon—from the nail bar, where the manicure magic happens, to the pedicure station to the waxing and facial rooms—sleek stainless steel and white elements flow throughout, offset with punches of bright colour. The minimalist approach to the design is reflected in the service menu, which offers manicures and pedicures (that don’t skimp on the necessary steps but leave out the “fluff and stuff”) and waxing and facial services that have cheeky names with back-to-basics benefits.

Clients’ never-ending love of manicures and pedicures has made Wood able to continue to expand her brand—including the appropriately named in-house beauty brand, Get Nailed—across the country. Her success has empowered other entrepreneurs with the same passion that Wood has to have a space of their own with an already-established brand, reasoning that “no one is going to care as much [about their space] as someone who owns the place and has invested in it,” both financially and energetically.

Team: 25 in total, including a manager, assistant manager, guest coordinators and esthetics experts

Brands: Essie (and Essie.Gel); OPI (and GelColor by OPI); Get Nailed