3 Tips to Boost Your Barbershop’s Profits

We take a closer look at the barbershop business model and get expert advice for getting your barbering business on the right track. 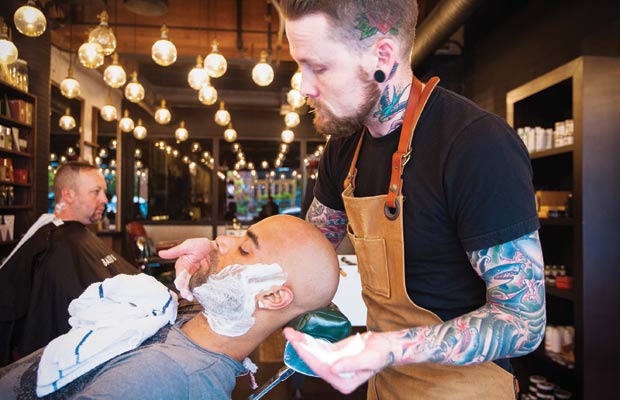 The barbering movement has undoubtedly revitalized the industry, casting a spotlight on men’s grooming. With today’s increasing number of barbershops popping up coast to coast, there is something for every man—from the traditional to lifestyle barbershops and everything in between.

“Barbering is very much here to stay,” says Terry Ritcey, national education director for Redken Canada. “We have the hipster barbers that have really dominated the barbering movement several years ago, but more hairstylists are also getting educated.”

Martin Rivard, co-founder of Barber & Co., a Vancouver chain of barbershops, says he has seen barbering evolve since opening his first shop six years ago. “Barbering is huge, especially on the west coast. On the east coast, the traditional shops have always been around, but the more modernized barbershops are fairly new,” he says. “Now, a guy might come into the barbershop with his buddy and watch the game together and get a shave together. It’s pretty cool. It’s pushed boundaries.”

As barbering continues to dominate men’s style, we narrow down a few tips for helping you stay ahead of the curve.

Education has had a significant role in the growth of barbering—from students entering the industry to hairstylists seeking to develop their craft. “There are barbers skilled at what they do, but there are just as many who are doing it as a lifestyle choice versus being a professional,” says Doug Stewart, co-owner of Garrison’s in Toronto. “Whenever something is trendy it attracts people who are more interested in being popular than doing the work. We see a lot of barbershops that focus on volume—the quantity of customers. The work of the modern barber is to not just clean the guy up but clients want their barbers to be more skilled.”

Brands have recognized the growing trend of barbering and have continued to invest in their educational programs to help hairstylists and barbers develop their skills. “The number one program of all our educational programs has been our men’s programs,” says Ritcey. “While there are these great looks you see for men, it’s very difficult for many people to create them if they haven’t been trained.”

“It’s important for everyone to educate themselves and be well versed in their craft. It’s the only thing that’s going to push our industry forward.” ~ Martin Rivard, co-founder of Barber & Co.

For barbershops and salons, Ritcey recommends paying closer attention to your decor and magazines. “Look at creating a whole male experience,” he says. “Right now, the focus is on creating a man-cave or man-station area that is attached or within the salon that is a designated men’s zone.”

Some barbershops have taken their decor to the next level—tailoring design for men with specific interests to offer a barbershop/man-cave hybrid. For example: Barber & Co.’s new Toronto location in the city’s trendy Ossington neighbourhood. The location, which was formerly an artist’s studio, has transformed into Rivard’s first full vision of his brand’s concept, with an eclectic gift shop located in the back of the barbershop. Afterhours, the shop is transformed into a full-service bar. “We appreciate the old school but we’re not focusing on being a traditional barbershop,” explains Rivard. “We want to get back to social interactions between gentlemen, which is what the barbershop was designed to be in earlier years. With our bar we’re trying to bring this idea a notch higher.” 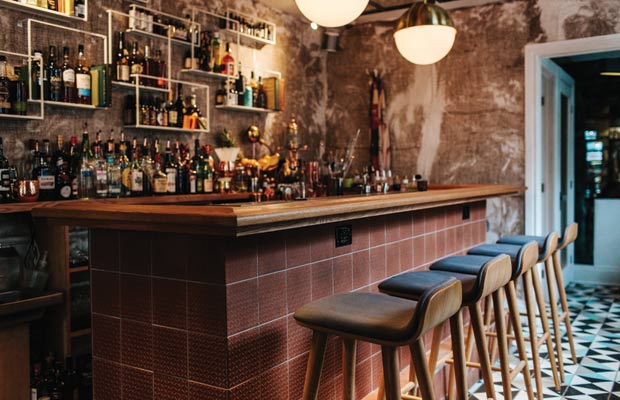 Once men feel comfortable in the shop’s space, it can be one of the fastest ways to grow your clientele. “It’s revitalizing an old school sense of community. Men are looking to spend more time and wanting to go to a place where they feel taken care of,” says Gillian Maley, brand manager of Tea Tree and Mitch for John Paul Mitchell Systems. “Men are man-scaping more now than they were years before, when they were just clean shaving themselves. They are looking at the trends happening in hair and grooming and want to have a space to go and be taken care of.”

While it’s important to keep your clients in mind when designing your space, Stewart says your staff’s needs are just as important. “We put great effort into designing the space to be a place where our people can feel special to work in every day,” says Stewart, who created a small, private space in the back of his shop for staff to relax, take breaks and rejuvenate. “We care as much about our barbers as we do about the clients. They are the people doing the work—the creating and thinking on their feet, so we wanted to make sure it’s a space that’s healthy for them.”

For his clients, Stewart says Garrison’s is designed to be a community. “It’s meant to be a place where guys talk to each other, even if they don’t know each other,” he says. “There are three areas where guys can sit and chat with one another. It’s not really a space where we want guys to just stare at their phones until their appointment is about to start. We’re trying to create a conversational experience.”

“80% of men use grooming products today and will spend upwards of 30 minutes grooming. Always be engaged with your guest; listen and ask the right questions.” ~ Terry Ritcey, National Education Director for Redken Canada

With so many men’s styling products on the market, it’s important for barbers and hairstylists to educate their clients. “The biggest thing that often happens is that clients aren’t properly shown how to use the products,” says Ritcey. “It’s about making what you’re using part of your conversation. Inform and educate and really let them know how the product is going to benefit them. Always focus on what it is, what it has and what it does. How is it ultimately going to benefit the client? It’s important to make sure we’re keeping them abreast of what’s current and what’s new. By us staying educated, it will keep them educated as well. It’s just that much more of a reason why they would want to keep coming back to a great professional.”