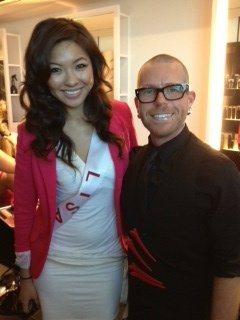 Revlon Professional Style Masters Canadian winner, Tim Kuo, was in Toronto this week to work on styles for the 62 Miss Universe Canada pageant contestants. As the official hair sponsor for the show, Revlon Professional Style Masters pampered contestants at the Quartz Crystal Spa at the Trump Hotel in Toronto, offering beauty tips, styling hair and Shellac-ing nails with CND.

We were there to check out the styles and pick up a couple tips on creating pageant hair. Not surprisingly, big hair was the name of the game, with nearly every contestant requesting something along the lines of “full, wavy, Victoria’s Secret hair.”

Kuo says the best way to get there is by starting with a good set.

1.He started by prepping hair with Amplifier Fiber Mousse.
2.Then, before curling each section with a 1 ¼ inch iron, he used Pre Tools Defender to protect from the heat.
3.Modular Hairspray_2 was also used on each section. Kuo called it a favourite because it’s brushable and has “good memory.”
4.After setting, he lightly brushed out the individual curls with a tail comb.
5.After lightly teasing at the roots, he fluffed the ends with his fingers in a backcombing motion.
6.A spritz of Glamourama Finisher polished off the look with a dose of shine.